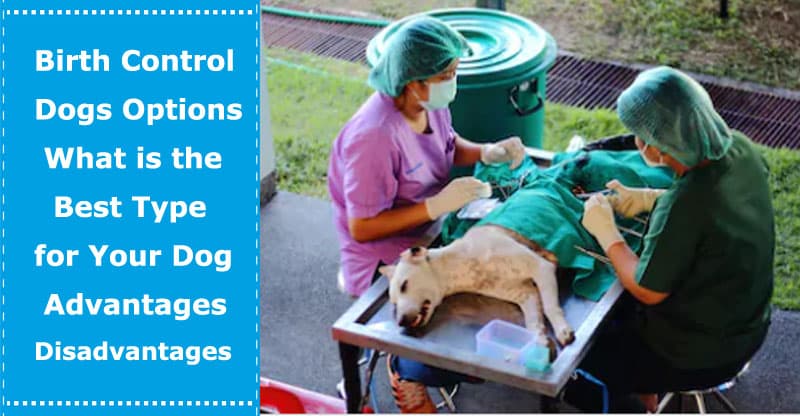 Home
Health
Birth Control For Dogs Options: What is the Best Type for Your Dog & Its Advantages and Disadvantages

The American Society for the Prevention of Cruelty to Animals (ASPCA) has to perform mercy killing or euthanization to around 670,000 shelter dogs every year. The roads are roamed by thousands of strays. These reasons are sufficient to keep the dog population under control.

So, birth control, even for dogs is necessary. This article will discuss the heat cycle of dogs, list the birth control options for dogs, and show the advantages and disadvantages of each option.

A different article discusses in detail what happens to females when they go into heat. To give a brief background:

Females usually go into heat every six months. Some smaller breeds can have three to four heat cycles per year, while large and giant breeds could have just one cycle per year.

The estrus part of the cycle lasts from 18-21 days. Females will have a bloody discharge that looks like the menstrual discharge of female humans. During this time, female dogs mate with male counterparts.

Why is birth control important for dogs?

Besides controlling the enormous dog population, here are additional reasons why birth control is essential for dogs.

1. Breeding dogs is a serious business

An owner must consider the genetic circumstances of the dogs that will match when breeding dogs. If you are crossbreeding, you will need to take note of the breed compatibility. You’ll have to look at the diseases that might be passed on to the puppies.

The latter reason is very important because some severe illnesses can be hereditary.

The von Willebrand disease, for instance, is a genetic abnormality that prevents clotting of blood in dogs. Similar to human hemophilia, this disease may cause dogs to bleed excessively when wounded as their blood is not clotting. Puppies from either mother or father dogs can inherit this disease.

Studies have shown that spayed or neutered male and female dogs do not develop conduct issues as much as intact pets. One study even found that after spaying or neutralizing, 59% of female dogs and 74% of male dogs exhibited less aggressive behavior. Neutered males are also not as mounting or wandering as the intact ones.

Birth control options for your dog

Spaying and neutering used to be the only birth control options available to dogs. Now, there are several options due to research and development on canine care.

Sometimes, female dogs undergo tubal ligation. This is not a standard procedure because females will still go through heat cycles even after going through this process.

Meanwhile, neutering involves the removal of a male dog’s testes.

These are regarded as major surgery to give your dog general anesthesia by a veterinarian. But there are minimal dangers to your dog. And the results are permanent.

The positive impacts of spaying and neutering for dogs have been noted by many research. As previously mentioned, it can have positive effects on your dog’s actions. Additional advantages are:

There are several medications that can be given to both female and male dogs that can suppress their heat cycles or influence the heat cycle hormones. Before you can purchase any for your dog, you will need a vet’s prescription.

a. Birth control pills for dogs

The first option under this option is birth control pills for dogs.

Some advantages to using pills over surgical methods for your dog are:

Just like other medications, there are some disadvantages to using pills over surgical methods for your dog:

b. Liquid contraceptive for dogs

Several liquid contraceptives can be injected into or given as drops to dogs.

Mibolerone (sometimes marketed as dimethylnortestosterone) is a steroid that suppresses female dogs ‘ heat cycle by neutralizing estrogen and progesterone hormone effects. This medication must be given to your dog at least one month before her “menstruation” or bloody discharge.

Medroxyprogesterone acetate works just like Megestrol Acetate. It comes in various forms, but it is usually administered as an injection.

Zeuterin is the only sterilant approved by the FDA for use on dogs. It is injected into the testicles of dogs.

Deslorelin acetate (also known as Suprelorin) is a predominantly used contraceptive implant for male dogs. But some studies have shown that it can be effective for female dogs too.

The implant can render your dog infertile for six or up to a year. It operates by releasing a chemical that suppresses hormones such as testosterone among male dogs.

3. Other types of birth control methods

Research and experiments on other types of birth control methods for dogs are still ongoing.

Experiments to inject a combination of calcium chloride and ethyl alcohol into male dogs have been conducted several time. Results showed similar sterility to Zeuterin’s effects. However, this method is not approved by the FDA.

There are also studies on using ultrasound to sterilize male dogs.

There is an IUD (intrauterine contraceptive device) being sold on the market specifically for dogs, but there are still no scientific studies on its use or effectiveness, so vets are skeptical about it.

Some owners have tried period panties for female dogs and belly bands for male dogs, but these have been proven as very temporary solutions only.

All of the birth control options listed above have their advantages and disadvantages. Consult your vet before you put your dog through any of them.

Also, aside from the reasons stated at the beginning of this article, there is one more reason why birth control is important for dogs.

Yes, puppies are adorable, but three to twelve puppies can generate a litter. That would imply six to twenty-four puppies in a year. These are puppies that need a ton of care, attention, and money.

If we don’t have the ability or capacity to take care of them, then it would be better to control the number of puppies that your female dog will have. Otherwise, the puppies will suffer from neglect. No puppy should suffer because we human beings were unable to take proper care of them.