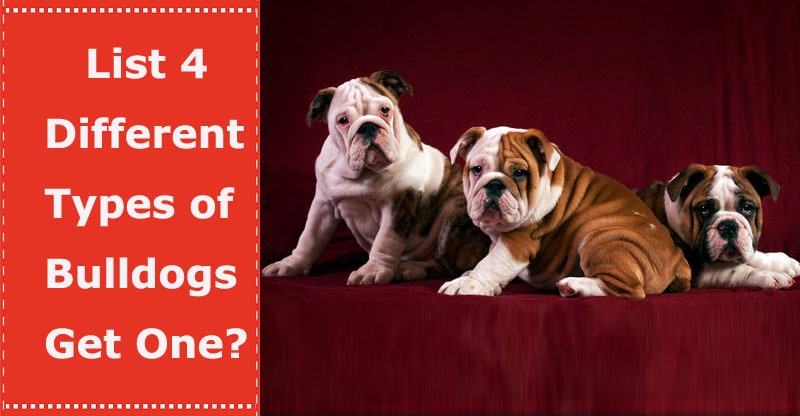 Home
Breeds
Dog Breeds: List 4 Different Types of Bulldogs – Should You Get One?

Bulldogs— they have been a mascot for hundreds of schools and universities for a while now.

And although those mascots are meant to be scary and intimidating— matching the typical short, snobby and stocky dog with wrinkled skin and compressed, grumpy face you first think about when talking about bulldog— this couldn’t be farther from the truth.

Yes, in the past, this breed was known to be aggressive and even a candidate for illegal dog fights. Today, however, more and more people realize how bulldogs can be so sweet and kind, becoming a lovable part of any family.

So, if you are one of those people that want to welcome this heavyweight, muscular breed to the family, you might want to consider first what type of bulldog you wish to take home.

The Different Types of Bulldogs

Probably the one you’re picturing at the mention of “bulldogs” is the English bulldog, also known as British Bulldogs or just “bulldogs.” After the bloody, killing sport of bull baiting was banned in England, the English bulldog developed into a shorter version of its ancestors and soon became the expected look in dog shows.

A medium-sized dog, the English bulldog features a smooth oat, wide shoulders, short and sturdy limbs, and a short-faced head that contribute to this breed’s usual shuffling walk. Their eyes are usually very dark with “rose” ears that fold inward at the lower edge.

The English bulldog has an extremely short face with a large, black nose featuring wide nostrils. Its flewies are drooping and overhanging from the jaw at each side. Its massive jaws are overshot with an overbite which is considered a staple trait of the breed.

Another usual trait is the “wheel back” or “roach back”, meaning that the back forms an arch toward the dog’s tail. Its chest and shoulders are very wide, which allows a low center of gravity that has been helpful during bull baiting for the breeds in the past. They use it to crawl close to the ground in order to stay out of the reach of the bull’s horn.

Meanwhile, the front teeth can be straight or slightly out-turned. The English bulldogs come in various coat colors including piebald, yellow, red, fawn white or a combination of these shades.

And although the breed’s looks can be quite appealing, with much-loved traits such as the overshot mouth, short nose, and cat wrinkles, they are also the main reason why these dogs are known for having several health problems and a shorter lifespan.

The English bulldog is deemed passive, kind and courageous but never aggressive. Originally bred for brutal sports, the breed has retained its courage, serving as good watchdogs. They are known to be people pleasers and incredibly fond of human attention. They are also sweet and gentle, despite their rowdy appearance, which makes them a popular family pet.

However, it should be noted that, despite being devoted and loving towards their human family, these dogs can also turn aggressive towards intruders and strangers.

It was believed that the French bulldog, as its name suggests, was bred in France, by crossing now-extinct toy bulldogs that came from England had been brought over to France by English lace workers.

This toy bulldog breed was crossed with another unknown breed, which must have led to its distinct “bat ear”, a characteristic that is not seen in English bulldogs.

French bulldogs feature muscular and compact bodies with heavy bones, as well as an alert appearance, thanks to their large, upright “bat ears.”

This breed has a large, square head with round and dark eyes. Its bat ears are set high on the head and are quite broad at the base, with the typical rounded top. The shape of its ears is the staple of the breed, and any other ear shape means disqualification in dog shows.

Like the English bulldog, this breed also has heavy wrinkles on its face, and soft rolls of skin over its short nose. Its preferred nose color for dog shows is black; however, there are other nose colors as well.

The mouth features flewies which hang over the dog’s lower jaw at both sides, and the jaw has an undershot bite. The throat also features some loose skin. Furthermore, the breed has a roach back with a broad chest and a nice belly tuck-up. Its tail can be either screwed or straight.

It has short front legs that are set wide apart, while the back legs are usually longer, making the loins elevated above the shoulders. The breed also boasts various colors of coats, including white, brindle, fawn, black, tan or a combination of these.

These domestic breeds are not that fussy and do well in small dwellings or apartments. They are wonderful companions, as they have a very sweet nature and are quite fond of kids, showing strong protective instincts.

Also, they are generally quiet and don’t bark that much, meaning they will not disturb the peace at your home and are great pets for homes with babies and kids.

When England banned the brutal sport of bull baiting, the typical working-style bulldogs were mostly replaced with the shorter breeds that were less athletic and resembled the English bulldog of today.

Some immigrants from the working class, however, managed to take with them some working bulldogs when immigrating to South America. There, farmers and ranchers found these dogs quite useful for various tasks such as herding.

After World War II this breed went almost extinct, but thanks to a veteran returning from war named John D. Johnson, along with Alan Scott and other breeders, the American Bulldog was saved.

Unlike the English bulldog, usually bred for looks and dog shows, American bulldogs are bred for their health and working capabilities.

This breed usually resembles the ancient bull baiter drawings, and as of today, comes in 2 types— the Scott and Johnson types.

The American Bulldogs, therefore, vary in look and appearance. Scott dogs are the “standard”, featuring a sleek and athletic appearance with longer muzzles, lighter bones, and a less distinct undershot bite.

The Johnson dogs, on the other hand, are referred to as the “bully dogs” and feature bulky bodies with more muscle mass, heavier bones, shorter muzzles, and more pronounced undershot bites.

The American Bulldogs of today is continued to be used as a multi-purpose working dog— they breed guards, help in hunts and farms, and provide companionship to farmers and hunters.

The American Bulldogs are bred to be confident and courageous, but they are also incredibly fun to keep. Over time, they grow quite attached to their owners and get along really well with children thanks to their strong protective instincts. However, this also leads to them being aggressive to intruders and strangers.

Unlike other breeds, especially English bulldogs, American bulldogs are prone to getting bored easily and require mental and physical stimulation to prevent behavioral problems.

After so many crossings, a true breed was obtained and called the Olde English Bulldog, to differentiate it from the typical English bulldog. This breed was selectively bred to look like the original bull baiting bulldogs of the past, while also eliminating the breathing problems and other breeding issues of the English Bulldog.

The Olde English Bulldogge is a muscular, medium-sized breed that is blessed with agility and stamina, making it a great companion for hiking trips. It features excessive wrinkles, with a black nose and wide nostrils. It has ears that are shaped like roses, tulips or buttons.

Its body is incredibly sturdy and powerful, characterized by a broad, deep chest with slight roach over its loin. It has a medium-short shiny coat in various colors, including grey, red, black and fawn.

The Olde English Bulldogges are popular for their friendly demeanor and kind attitudes towards strangers. They are also sweet and gentle, making them great with kids, and enjoy playtime in the backyard.

When compared to other bulldog breeds, this one can be a bit needy and demanding, since it is incredibly fond of company and attention, and eager to please its owners. Also, this is one of the bulldog breeds that loves toys. You might want to avoid giving them stuffed toys, soft rubbers or rawhides, though, because they chew really well with their strong teeth.

Other Less Common Types Of Bulldogs

Should You Get A Bulldog?

Scary and intimidating as they may seem, bulldogs are great companion dogs that make your life more fun and vibrant.

And, although most people perceive them as ugly because of their protruding lower jaws, loose skin and stubby body, their rich personality, gentle demeanor and not overly rambunctious or lazy nature make them a great addition to any family.

Sadly, some popular breeds, including the English bulldog and French dog, are prone to most health problems and need considerable veterinary care.

However, if you know that you have the finances, patience and time to properly care for this breed over the course of its lifetime, bulldogs will definitely make your life better and create a bond that lasts for a lifetime.