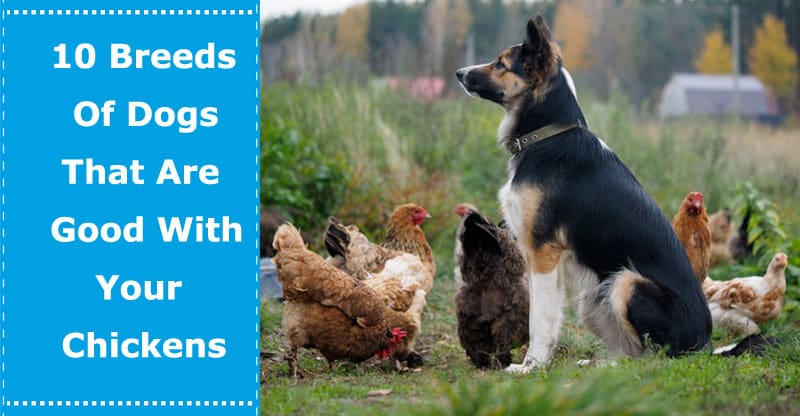 It is common for us, humans, to see dogs chasing chickens. I’ve seen it a lot because my family has five dogs, and I actually feel pity for the chickens whenever our dogs chases them. Dogs are thought to have some aggressive instincts within, that’s why they chase any small animals they see. There are also some that could never harm those poor chickens or any other small animals, though. These dogs have a low prey drive, which means they usually won’t chase away any other creatures around them.

Breeds of dogs that have a low prey drive are usually friendly to small animals like ducks and chickens. Apart from breeds that have a low prey drive, there are also some called “livestock guard dogs”. This type of dogs is considered ideal to keep any animals at your farm safe and be kind to them, whether we’re talking about sheep, ducks or chickens.

Livestock guard dogs are playful and not at all aggressive, which is why they won’t harm your chickens or any other small animals. By contrast, the dogs that chase smaller animals (like my dogs) have a high prey drive. So, if you have bunch of chickens at your house or farm, it is much better to get a livestock guard dog or one that has a low prey drive.

This breed of dog is recognized as a livestock guard dog, and they have low prey drive. As such, they are known to act attentively and not at all aggressively, which means that they won’t harm your other farm animals, and you can trust them when it comes to the security of your livestock.

This dog is a huge one, yet they’re playful and friendly to smaller animals like chickens. You don’t have to worry that they might chase or eat your chickens, because this breed belongs to the category of livestock guards.  Furthermore, the Maremma Sheepdog is humane, devoted and attentive.

If you’re planning to get this breed, you must have enough space at home. You will also need to groom them regularly because of their fur; if you don’t, you’ll be vacuuming your living room a lot.

This breed is already common among farmers, because Akbash are livestock guard dogs. They are sociable, jolly and friendly. They are also tranquil, attentive and intelligent. This breed of dog is easy to train and they don’t harm the other animals you may have at home.

If you’re planning to get this breed, then it is recommended that you buy or adopt a puppy first, in order to train it while it’s young. Having an Akbash doesn’t bring about any grooming problem, because they don’t have layered fur. They are also very protective, not just to you, as their owner, but also to your chickens and any other animals you have at home or in your barn.

Now, this is the breed that you may love to have. Pyrenean Mastiff dogs are considered to be great livestock dogs, because they have an extraordinary strength, yet they’re very loyal to both humans and smaller animals. This is one of the breeds of dogs that can be trusted with watching your house and livestock.

However, getting a Pyrenean Mastiff involves making sure that you train them properly while they are young. The reason for this is to enhance their intellect and improve their socialization with the other animals you have at home.

This breed is usually called the “Giant mop” because of their white thick fur that is similar to a mop. Some vets also called them the “Bob Marley” of the dogs’ world. This breed is almost guaranteed to be friendly with your chickens and the other animals you have at your house or farm. Komondors are also playful and attentive.

One thing you would have to remember, though, is that Komondors might get so protective that they might harm strangers even if these don’t have any bad intentions. So, proper training is a must for this breed.

The Anatolian Shepherd is the most intelligent of all livestock guard dogs, that’s why you won’t have any problem when it comes to training them – that is, if we don’t count obedience training. This breed will guard any other small animals you have, including your chickens, very attentively.

Another super intelligent livestock guard dog that you would love to have. This breed is not just playful, but also extremely devoted to their owners. They are very attentive, which is why they can sense even the smallest threat to your other small animals. Kuvasz dogs are friendly and playful to the smaller animals, that’s why they are one of the breeds of dogs that are particularly good with chickens.

One of the best livestock guard dogs you can get. This breed has a similar physical appearance to the Antolian Shepherd. Kangal dogs are kind to any small animals, which means that they won’t harm your chickens. They are also intelligent, easy to train and they can protect livestock from any predators.

Kangal dogs are average in size, but they also possess an unusual speed and strength. This is the breed that quite a lot of farmers would prefer to have, because Kangal dogs are extremely devoted and protective. One thing you should keep in mind, though, is that they need quite a lot of space.

A perfect breed of dog to have that doesn’t chase any chickens or cats. This is one of the tiniest dogs, and a perfect one for people who have allergies to fur. The reason for that is that Maltese dogs don’t shed a lot.

This breed has a low prey drive, which makes them super friendly to any another animal around them, including your chickens. However, they are not the type that could ward off huge predators, so Maltese dogs are not the kind of pets that you might want to have if you need them to watch over your livestock.

This breed of dog is slightly similar to the Maltese one, but it usually grows bigger than the latter. Japanese Chins are calm dogs, but they can also be playful. That doesn’t mean that they’re aggressive and would chase your chickens away, though. They are actually extremely friendly to other animals around them, since they have a low prey drive.

The Japanese Chin is also the kind of dog you would usually see sitting or chilling on their owner’s lap. However, Maltese and Japanese Chin are not the type of dogs that you can expect to guard your livestock.

Most of the dogs presented above are the breeds that usually act as livestock guard dogs. However, while some of the ones mentioned are not part of this category per se, they do a low prey drive, which means they won’t harm your chickens either.

Because I know that dogs will always barks at something new, I have also put together a list of tips on how to introduce them to your chickens. I hope my advice will prove to be helpful to you!