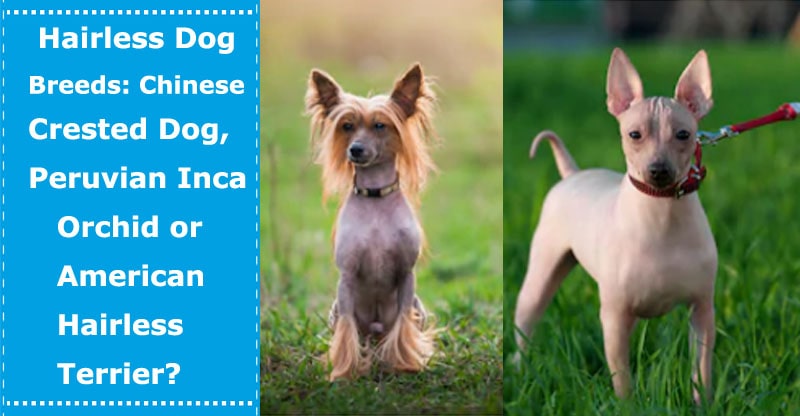 Home
Breeds
Hairless Dog Breeds: Chinese Crested Dog, Peruvian Inca Orchid or American Hairless Terrier? Which Were Bred to Be Hairless and Why?

Perhaps the first thing that comes to our minds when we think of dogs is the picture of a furry buddy. Associating dogs with hairlessness is very rare because we rarely see one that is not covered in fur — unless the dog suffers from skin illnesses such as mange. Of course, there are genuinely hairless dogs.

The Feeling of Petting a Hairless Dog

Petting a hair dog might be a sensation you know all too well. So it might be really strange to think what it would be like to touch a bald dog. It can be a really strange sensation at first without the smooth fur that will stand in the manner of your hand and the skin of your dog.

Hairless dog owners report that they feel like “touching a slab of hot bologna” when they touch their pet. So, we can think it’s very smooth and soft, which can be very moisturized a bit comparable to human skin.

Although hairless dog breeds are rare at this point, they have actually been around for thousands of years. The Xoloitzcuintli or Xolo, for example, is reported to have lived together with Aztec people around 3,500 years ago.

Some hairless dog breeds are completely hairless, while others, like the Hairless Chinese Crested Dog, have hair tufts in some areas of their bodies. There are coats or furs to safeguard a dog against both heat and cold, as well as dirt and other foreign objects. It also enables a dog to interact through body language with others, as elevated heckles imply that they are afraid.

Given the many functions of coats in dogs, how come some breeds are hairless?

For both AKC-recognized and unofficial hairless dog breeds, hairlessness turns out to be a genetic mutation. The mutated gene can either be recessive or dominant. To get a clearer image of what occurred, let’s discuss briefly about some genetic concepts.

Dogs have 39 pairs of chromosomes, so they have a total of 78 (compared to human’s 46 chromosomes). Each pair is made up of two alleles, one from each parent.

For one characteristic, a dog will inherit two alleles— one per parent. So, it may be RR, Rr, or rr combinations. A dog only requires one copy of the red allele because it is dominant to display the red coat color. Both RR and Rr will, therefore, appear red. A dog must have both copies of the black allele (rr) in order to appear black.

So, is Dog Hairlessness Caused by Nature or by Man?

Hairlessness in dogs is both caused by selective breeding and natural selection. As mentioned above, this occurred because the genes for hairlessness mutated.

If the mutation affects the dominant allele, then the likelihood of producing hairless offspring goes higher. The breed would then become mostly hairless without any human intervention (natural selection)

However, it should be observed that all hairless dominants have heterozygous pairings of alleles (Hh), as homozygous pairings (HH) are deadly. Hence, hairless dogs may have coated puppies in their litter that have mutated dominant alleles.

On the other hand, if the mutation affects the recessive allele, then it must take two recessive alleles (hh) to produce a hairless offspring. In this scenario, selective breeding is required if you specifically want the hairless type.

Additionally, hairlessness is genetically associated with missing teeth. Thus, it’s quite common to encounter hairless dogs with an incomplete set of teeth.

The Chinese Crested Dog comes in two types — the hairless dominant that has hair on its head only (crest), ankles (socks), and tail (plume), and the fully coated recessive Powderpuff. The Hairless Crested and the Powderpuff can both appear in the same litter.

Despite its name, the Chinese Crested didn’t originally come from China. The theory was that Chinese traders brought home big hairless dogs from Africa during ancient times.

In China, it was then bred to be smaller, then they became well-known as rat exterminators on trading ships as plagues were very rampant back then. Since the dogs were also traded that time, they also became known as the “Chinese Ship Dog.”

Both types of Chinese Crested are fun-loving and have a lot of love for their human. They can be cautious of strangers and make them trustworthy guardians. The hairless Crested is certainly a taste, but graceful in its moves, as this diversity is one of the best contenders for the “World’s Ugliest Dog.”

While the Xolo comes in hairless as well as coated varieties, many still call it the “Mexican Hairless Dog.” It was named after the Aztec god of fire Xolotl, plus “itzcuintli” which means “dog.” As one of the oldest dog breeds on earth, they truly stood the test of time.

Xolos are known to be protective companions. If you’ve seen Disney’s “Coco,” Miguel’s companion dog Dante is actually a Xolo, which is revealed to be a spirit guide.

Regrettably, when their owners died, the ancient Xolos was sacrificed as a spirit guide. The old Aztecs buried them next to their owners and believed that they would lead them into their afterlife. The Xolo is Mexico’s national treasure and is presented in art by famous Mexican artists such as Frida Kahlo and Diego Rivera.

Calling a dog an “orchid” may seem strange, but this breed was named as such because the Conquistadors found these dogs living beside orchids. This dependable sighthound comes in hairless and coated varieties. The skin of the hairless version can be solid-colored or spotted.

These dogs ‘ first records can be found in Moche potteries that were thought to be made in 750 A.D. They were also seen in Incan, Chimu, and Chancay potteries. The Peruvian Inca Orchids were used as companions, and because of their hairlessness, you will see them wearing sweaters in some potteries.

In pre-Hispanic Peru, people depended on their warmth for treating respiratory diseases and arthritis. The original orchids were relatively small in size, but interbreeding with the foreigner’s dogs occurred when the Conquistadors arrived. Over time, the breed came in three sizes

As a sighthound, make sure that you socialize them early on, especially if you have other pets at home. He may think that your other small pets are prey to be hunted, so it is important to introduce him to other dogs in his puppyhood.

Likewise the hairless breeds above, the American Hairless Terrier also has a coated variety. In addition, the AHT may have hair on its whiskers and eyebrows. As a dog grown in Louisiana, the AHT is the first breed of American hairless dogs. However, unlike the other hairless breeds, they have no missing teeth.

The AHT is a descendant of the Rat Terrier. As the name suggests, these terriers were bred to kill rats. In the late 1800s, British miners brought Rat Terriers to rural America.

A hairless puppy was born out of a Rat Terriers litter in 1972. The name of this puppy was Josephine. When Josephine was bred, she produced one hairless female puppy named Gypsy. Josephine gave birth to two hairless children named Snoopy and Jemima 8 years after, producing a number of coated puppies.

In 1983, Snoopy was bred with his siblings, producing several hairless puppies. Josephine was the starting branch of the new breed, which was named American Hairless Terrier. In 2016, AKC officially recognized the AHT as a breed.

The Argentine Pila Dog shares many similarities with the Xolo and the Peruvian Inca Orchid. Argentine legends say that the Incas gifted the first Pila Dogs that came to the country as means of solidifying political ties.

This Central American hairless dog breed first appeared in Santa Elena Peninsula. Aside from its hairlessness, another distinguishing feature of the Ecuadorian Hairless Dog is the lack of its premolar teeth.

It is believed that it came from the Inca Orchid of Peru. It’s not officially recognized as a breed right now. Some see it as a Peruvian variant, making it one of the world’s rarest dogs.

Unlike the other hairless dogs that have a few hairs in some body parts, the Ecuadorian Hairless Dog is almost totally hairless.

Not much is known about the Abyssinian Sand Terrier, but it is believed that it developed in the African continent, whether by man or by nature. Some experts theorize that due to trading in the old days, they share genetic similarities with the Chinese Crested Dog.

The medio is medium in size and has short legs, with a gracefulness that its strength cleverly shadows. The grande, on the other hand, is a long-legged sighthound, widely known for being light-footed and agile.

Since these pooches’ skin aren’t protected by fur, they are more prone to developing skin issues and skin cancer. Grooming rituals should be focused on keeping their skin healthy.

Conclusion: Hairlessness as a Beautiful Mutation!

Some genetic mutations aren’t so bad, and one of them is dog hairlessness. Even though they may look and feel weird, they are just like any other sweet, playful, affectionate, and protective pet dog. In any case, hairless dogs are an acquired taste, so people will likely need more time to appreciate the true beauty of a hairless dog breed.