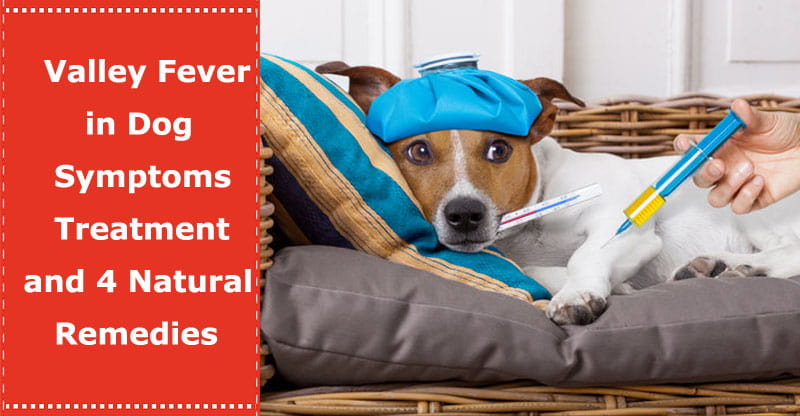 Valley Fever, also known as Coccidioidomycosis, is a fatal disease that affects not only humans, but also dogs.

By comparison with humans, dogs appear to be greatly affected by this disease due to the fact that they have a habit of sniffing, playing in dirt and digging holes, which makes them more susceptible to inhaling the spores produced by the fungus.

How do dogs catch Valley Fever?

The fungus causing the disease, C. immitis, has 2 forms, depending on the situation and environment that it finds itself in.

Most of the time, the fungus appears in a mold-like form, especially if the weather is hot; once it rains, the fungus grows and starts immersing spores. The spores produced by the fungi are infectious, they are usually spread through air and affect dogs especially if the weather is windy, there’s ongoing construction or there are farms situated nearby.

Once infectious spores are inhaled, they automatically transform into a yeast-like virus that immediately causes lung infection.

Owners should keep in mind that Valley Fever is a type of airborne disease and it cannot be transmitted from human to animal or even from an animal to another animal. In short, it’s not contagious and having a dog who suffers from Valley Fever won’t cause any harm to another pet living in the house or to any members of your family.

What are the common dog symptoms of Valley Fever?

Once the infectious spore has entered the dog’s lungs, what will happen next depends on the health status of each individual dog.

The spores become much larger once they are breathed inside the lungs. The transformed version of the spores is called spherules.

In the case of adult dogs in good health condition, the immune system is usually able to fight off the fungus and no repercussions or health issues are caused.

However, for puppies, senior dogs and dogs that suffer from underlying diseases which cause a weak immune system, the story looks completely different.

The latter are usually the easiest target for Valley Fever; the spores enter their system and turn into spherules, the spherules then erupt and transmit other viruses that can spread to the dog’s vital organs, especially the lungs.

Once Valley Fever is fully spread out, treating the dog becomes increasingly harder, and it is often the case that the virus remains forever in the dog’s system.

There are 2 types of Valley Fever; the symptoms that your dog is showing will indicate the type of Valley fever they contracted.

This means that the virus only affected the lungs, and that no other vital organs were exposed to the disease.

The common symptoms of the primary disease include intense coughing, high fever, loss of appetite, extreme exhaustion and even depression.

Unfortunately, symptoms don’t normally show until 3 weeks after your dog has been infected. In worst-case scenarios, the disease might remain inactive for up to 3 years or more before the dog shows any indication of Valley Fever.

As the name suggests, in this case the fungus has spread throughout the dog’s organs; aside from the lungs, the joints and bones are also commonly hit by the disease. Your dog will show signs of weakness, their joints may appear swollen and you might notice that their movements are reduced to a minimum, which is mainly the result of the pain experienced in the joints.

In severe circumstances, eye infection may show, which can lead to the dog going blind. In rare cases, the fungus might also infect the dog’s brain, thus causing frequent seizure activity.

How is Valley Fever Diagnosed?

Valley Fever is most common in places where the fungus grows. If you happen to live in such an area and your dog is showing symptoms that might indicate that they might’ve gotten the fungus, an urgent trip to the veterinary is required.

Once the dog is taken to the vet, a series of tests will be carried out. These procedures may include:

Owners have the option of letting their dogs undergo clinical treatment or using natural remedies. The course of action will greatly depend on the extent of the infection.

As far as clinical treatments are concerned, these are often prescribed by the vet if the disease has already spread widely. Treatments including oral anti-fungal medication (needs to be taken for 6-12 months), cough suppressants, pain relievers and steroids are commonly used to treat severe Valley Fever cases.

The use of drugs and high levels of unnatural substances can cause side effects such as diarrhea, nausea, vomiting and loss of appetite. Therefore, a lot of dog owners choose more natural approaches in order to cure their dogs’ disease. These treatments may include:

Apart from the aforementioned treatments, there are also Top 4 natural remedies that owners can try to prevent Valley Fever or even cure it.

Multivitamins which are high in Vitamin C will help fight off the infection inside your dog. Unlike the usual drugs used to cure Valley Fever, multivitamins will not cause any side effects. In fact, the only outcome they will bring about will be a boost in the dog’s immune system.

Garlic is known to have antibacterial properties. By adding raw or slightly cooked garlic in your dog’s food, you will help them fight off the infection.

However, the amount of garlic required needs to be measured be based on your dog’s weight:

3.  Use the Yucca Supplement

Natural Yucca made for dogs is known to ease inflammation, remove tension in the joints and even heal arthritis. By giving this supplement to your dog, you will help them recover much faster, because they will no longer have any trouble or feel any pain when trying to move around.

4.  Make sure that monitor your dog’s eating habits closely

One of the side effects brought about by Valley Fever is loss of appetite. In order for your dog to fight off the fungus and boost their immune system, you will therefore need to force them to eat regularly.

Force feeding your dog should not be done aggressively, and should only become an option if you notice that your dog truly isn’t eating enough. Force feeding means that you might need to hand-feed your dog just to make sure that they are eating.

Valley Fever is ranked as one of the top infectious diseases that can cause grave effects on your dog’s health. If not handled properly, the disease is likely to relapse and might end up costing you your dog’s life.

Since it’s hard to spot this type of infectious disease during its early stages, it is always best to look into possible prevention methods, especially if you live in an area where this type of fungus grows. As they say, prevention will always be better than cure.

If your dog does end up being diagnosed with Valley Fever, there’s no need to panic, though, because there are a lot of treatments and tests that will help you figure out how to cure your furry friend and possibly get rid of the infection. These treatments may cause a lot of side effects, but this depends on the current state of your dog’s health. Since the infection can be deadly, it is highly recommended that you seek help from your vet as soon as you notice symptoms or any changes in your dog’s behavior that may indicate Valley Fever.

For owners who can’t afford expensive treatments, there are also alternative natural remedies that you can try to help your dog fight against Valley Fever. However, if you try to cure the infection using only natural alternatives, you need to make sure that you are consistent. Money may not be involved in the procedure, but it will cost you time and effort which you need to be ready to invest.

All dog owners should value their dog’s life as much as they value those of their family members’. Once your dog gets sick, you should ensure that they are properly taken care of. The idea that a dog becomes useless once they get sick should not even cross your mind. In fact, your dog will only have you in their lifetime, so you must make sure that you will be there when they need you.