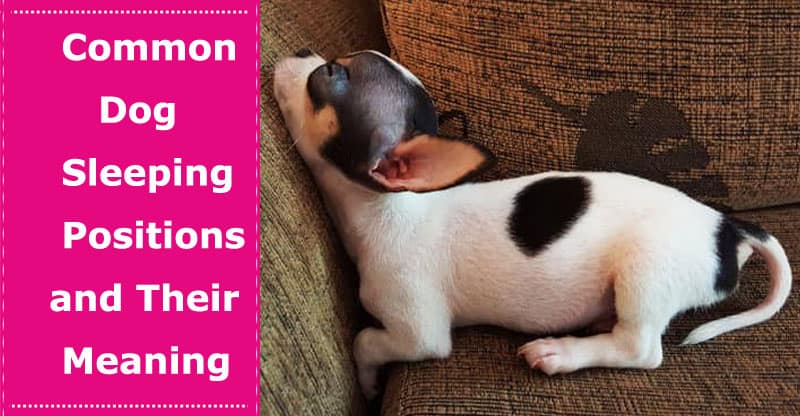 Do you ever wonder why dogs sleep in different positions?

Doggies are very active beings – they run, they play, they jump, they sniff, they chase, and a lot more that I know you know deep down if you’re a pet owner. No matter how active dogs can be, of course, they won’t be able to avoid the inevitable power of sleepiness. In fact, it’s hard to say that they’re avoiding it, because they actually much like dozing off.

Is your dog the sleepy twist and turner one? Do you often spot your dog sleeping in a weird, cute, or confusing position? You’re almost certainly looking for meanings behind those positions, and if not, you’d better be!

We all know that dogs are naturally cute, in anything they do and anywhere they are. But although that’s a given, there are also hidden messages behind those adorable sleeping fuzzy creatures, which we can ‘read’ based on how they doze off. You may have not been expecting this, but the bedtime positions of your four-legged pals can let you in on many secrets regarding their personality, health or mood.

Read these different positions that your dog may be sleeping in and discover their meanings.

Imagine your dog positioned like the logo of Mozilla Firefox, its paws tucked beneath its furry body, and its tail rolled up until it seems like the head is resting on it. Done? That’s what your dog in the “Curled Up Fur-Ball” position looks like.

If you’ve ever seen your dog sleeping like this, then it might be trying to stay warm by conserving heat. So, if you see your pal dozing off like this, pop some blanket, or something to help against the cold, over them.

The position could also reflect the fact that the dog is trying to protect themselves, especially their vital parts. This is a well-known defensive method which is said to have been passed on to dogs by their ancestors, the wolves. Being defensive makes dogs tense so as to keep themselves from being exposed and vulnerable; therefore, whenever they curl up they appear uncomfortable or restless.

But don’t dwell too much on the thought that they may be feeling threatened. Sometimes, dogs simply prefer this position because they are trying to create their own space of private relaxation.

2. Sleeper on its side

Sleeping on the side is considered the best for dogs. This position is comfortable, relaxed and cozy, so the pup is sure to get a restful sleep.

You will be able to tell that your friend is getting all comfy and cozy when you see them sleeping in a way that lets vital parts or organs exposed. This vulnerability expresses their feeling of security and safety.

It could also mean that your dog is particularly at ease in the environment it’s in or it does not feel threatened. Plus, since the doggo is visibly showing trust, the people around it may have a close relationship to it.

There are still cases in which dogs are not easygoing and relaxed when they assume the on-the-side position, though. There are times when they sleep on their side while simultaneously panting or appearing restless, because they feel uncomfortable, aloof, or in danger. The reason for this, again, goes all the way back to their wolfish ancestors, because wolves lie down on their side as a sign of submission.

Do I even have to describe this for you? I’m pretty sure you’re fairly acquainted with this dog sleeping position. Doggie on its tummy with all four limbs outstretched? Yes, that’s the one I’m talking about.

Isn’t this one of the cutest positions to see your best friend sleeping in? Although this is a sign that they are comfortable and all, it doesn’t mean your dog is having a deep sleep, as previously described in the side position.

Most dogs that sleep in the super-dog position are considered active and lively. Have you ever seen your dog play around and then suddenly doze off in this manner? This position lets your dog stand, spring up, or get on their paws instantly if they want to.

It’s a favorite around little puppies, who seem to be super full of life and energetic all the time, but at the same time tend to get tired and drowsy during playtime, hence dozing off on the spot.

So, if you catch miss or mister doggo napping as if they were flying through the sky, ready to be a hero, then you know they’re set out to do some activities – especially play!

4. Stretched out in the air

You may have witnessed and probably laughed at the times that your dog is doing crazy legs while sleeping. This position is definitely a crazy one. Your dog’s four paws stuck in mid-air, sometimes also crazily stretched for whatever reason. Yep, that’s certainly the case here!

It may look different and weird for us, but this position is very comfortable for those furry creatures. It makes them laid-back and relaxed because it helps them break free from the tension accumulated in their bodies. It is also a sign that they feel highly confident about the environment they are in.

Dogs usually sleep in this position when they’re at home, or at least feel at home, and when they’re around those that they trust or they comfortable showing their vulnerability to.

As opposed to the curled-up position, the stretched-out-in-the-air pose is common when the weather is hot, because the doggies exposed their tummies in order to cool down. An explanation for this kind of behavior is their tummy is less furry than the rest of their body.

If your answer is yes to one or more of the previous questions, then the personality that your dog or dogs possess is very loving, affectionate, and warm. They always want to bond with you and trust you enough to be close to you. Now, if you’re not touched by that thought, I honestly don’t know what to make of you anymore.

There’s a rather pretty simple explanation for your cuddle bug sleeping in this position. The behavior itself may be brought about by the way they were raised as puppies. As dogs grow older and mature, they tend to ‘carry’ this sleeping habit along as some sort of learned feeling of ease or comfort.

In addition to that, dogs experience difficulties in regulating and maintaining their body temperature, so they might be snuggling with you because they feel cold. In such situations, a blanket or something to warm them up might help them sleep better.

6. Flat and comfy on the tummy

Have you seen Paningning, the infamous doggy on its tummy? Well, if not, you ought to check out the pictures, ‘cause you are missing out on a whole new level of cuteness!

If your dogs also get on their tummy while sleeping, this might mean that they are ready for action, such as pouncing on any form of threat or grabbing any chance of fun. This is a sign that your dog is lively and energetic at that moment. It’s not the most relaxed position to sleep in, so your dog is definitely not in deep sleep. In fact, it might simply be dozing off from tiredness.

Some say that pooches that lie on their bellies might be timid and shy. The generalization, of course, does not pertain to every dog.

Additionally, this position is more commonly used by puppies after engaging in physical activities. They just do it naturally when tired and exhausted until they fall into deep sleep. Moreover, brachycephalic dogs, which have short snouts and skulls, commonly assume this position because of the difficulties they experience when breathing.

Pet owners are not automatically spoon-fed with information about their dogs. That is why we should take the clue-digging into our own hands by paying attention and observing our furry friends even when they are sound asleep. Our responsibility to them is not limited to when they’re running around or playing actively. We are pet owners regardless of whether our fuzz balls are fast asleep or not.

If you’ve never observed your best friend while they’re sleeping, then you’d better start taking the time to observe them now. You can only provide happiness and wellness to your dogs if you are aware of how they are feeling, and their sleeping positions are great signs that reveal the level of contentment which your dogs are currently experiencing.

Keep in mind that the next time you see your furry buddy dozing off, you need to take in the details of every position they’re sleeping in!

Related tip: Why Does Dog Sleep So Much – Its Sleeping Habit Normal?