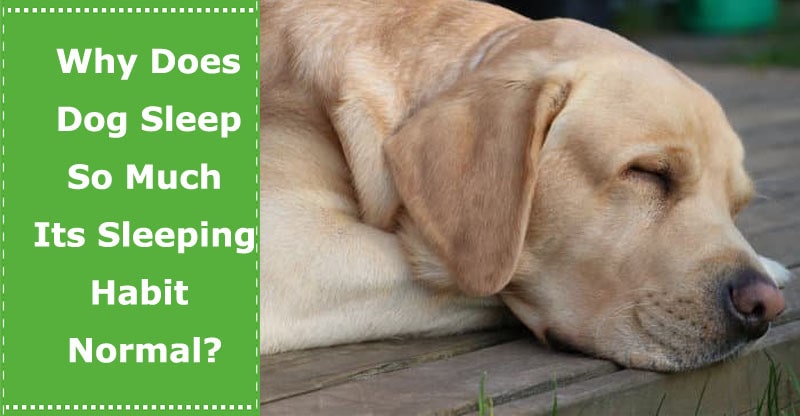 Home
Behavior
Why Does Dog Sleep So Much – Its Sleeping Habit Normal?

Dogs are known to be full of energy, as they are often seen running around or simply being active alongside their owners.

It is very much unusual for a dog to be perceived as lazy, but since they do use a huge amount of their energy throughout the day, they also tend to do a lot of snoozing.

There are a lot of factors that contribute to a dog’s sleeping habit. While it is not common for dogs to be lazy, there are some breeds that are just not made for an active lifestyle.

As a dog owner, how would you know if your dog’s sleeping habit is normal or if it’s a sign of a possible health issue?

5 Common Reasons why your dog sleeps so much

Like in the case of humans, a dog’s sleeping habits also depend on how old and big the pet actually is.

In most cases, puppies tend to sleep a lot more than middle-aged dogs. Since puppies are still in the process of growing, they tend to exhibit high levels of energy over shorter time spans.

Similarly to human babies, puppies tend to burst like an energy-crazed ball, only to suddenly fall fast asleep due to exhaustion, regardless of the time of day. As dogs age, it is very common for them to move a lot more slowly and for their energy to be lower than it used to be when they were pups or young adults. As a result, activities end up exhausting them and they choose to sleep during the remaining hours of the day.

A dog’s behavior and attitude will depend on the state of the place that he lives in, how its owners treat him and how he gets along with other pets in the household.

Since dogs are known as one of the most sociable creatures there are, they tend to build trust and loyalty not only with their owners, but also with the other dogs that they grow up with.

Once a dog gets attached to a companion or gets used to a living situation, any change in the environment will lead to a change in interest as well. If a dog loses an owner or a long-time dog best friend, you will notice a sudden change in his behavior, which can indicate that the dog is going through depression.

A common sign that your dog is going through something because of a sudden change in his life is the habit of sleeping even when you try to play with him or get him to do activities that he normally loves.

Owners will need to give their dogs time to adjust and help as much as they can so that their furry friends grow accustomed to the new situation.

If you notice that your dog is getting less and less energetic, if it seems like he’s losing interest in any activity that he used to love, and all he does is sleep, then this might suggest a more serious matter.

Frequent sleeping might be linked to other grave illnesses other than exhaustion. If your dog is showing signs of disinterest and always seems to be lacking energy, there’s a possibility that he might suffer from diabetes or be infected by life-threatening diseases such as parvo virus, Lyme disease or rabies.

One common reason why your dog might be sleeping a lot is the fact that he doesn’t have anything better to do.

Working dogs such as German Shepherds, who are commonly known as Police dogs, tend to be more alert and stay up longer than other domestic dogs.

Because of the mental and physical aspects involved in being a Police dog, German Shepherds love a good challenge and their brains are constantly stimulated. These dogs go through strenuous trainings, whose main goal is to teach the dogs to keep their focus and have proper coordination.

In order for a house dog to have the same stimulation, his owners will need to exert effort in playing with him. It’s also good to prepare activities that will challenge your dog’s skills, be it a simple obstacle course or a game of finding where the treats are hidden.

5. High levels of stress or anxiety

Emotional stress can also be one of the reasons why your dog is sleeping a lot more than he should. This can be triggered by different types of causes, including the way the dog is treated by his owners or how he is cared for.

In order to reduce your dog’s anxiety, constant reassurance is required. If you think that past mistakes such as harsh punishments might’ve triggered this anxiety, then you will need to re-evaluate your attitude or find a better way to discipline your dog.

Tracking your dog’s daily sleeping habits is not easy, especially given the fact that the most common reason why dogs sleep is that they are bored. But as dog owners, how will you be able to recognize the fine line between a normal sleeping habit and a real problem?

Is your dog’s sleeping habit normal?

Signs that your dog’s sleeping habit is not normal:

Common clues that your dog is oversleeping:

Is sleeping with your dog a good idea?

Every dog owners’ dream is to be able to sleep soundly with their best friend, but will co-sleeping help create a bond between you and your dog or will it create more issues?

Studies show that it is not advisable to share your bed with your dog. By doing this, you will only create confusion with regards to acceptable boundaries. If you sleep with your dog, he will have a sense of dominance and, as we know, these animals are very much territorial. They might think that the portion of the bed that you share with them is a space for them alone and no one else, not even you, can sit on that spot anymore.

Apart from space-related issues, another problem that can arise when you sleep with your dog is that he may become too dependent on you and end up struggling with sleep when you are not around. Since it’s not possible for you to be around your dog at all times, your furry friend will experience unease or will feel overwhelmed quite often, thus falling prey to separation anxiety.

Separation anxiety should be avoided by all means, since it leads to barking, chewing, and other destructive behaviors.

How do you make your dog choose to be active rather than sleep?

If you’re a lazy dog-owner, expect your dog to be the same. In order for dogs to choose to be more active, their owners need to take their time and search for new and fun ways to get their pet moving.

Dogs have different sets of interests – most dogs love to go on walks in the park, others enjoy a more interactive game of fetch and some actually do love playing with water on the beach. If you don’t have time to leave home, one alternative activity is building an obstacle course or creating puzzles that will stimulate brain activity.

By presenting all these options to your dog, you’ll be able to see what his interests are and what type of activity he is most likely to become engaged in. Once your dog’s attention is captured, oversleeping will no longer be an issue.

There’s nothing wrong with seeing your dog lounging or snoozing from time to time, but as a dog-owner, you will need to recognize the fine line between a normal sleeping habit and an actual problem.

The most common reason why dogs choose to sleep the hours of the days away is the lack of activities, which is entirely the owners’ responsibility. Usually dogs sleep out of boredom, and if this happens frequently, they will of course tend to form a habit out of it.

Owners should be able to bring about a bit of excitement in their dog’s life. Fun is not supposed to cost a lot, but it will require time and effort. By providing your dog with activities that will help him forget about sleeping, you will help train his skills and avoid his having a sedentary lifestyle.