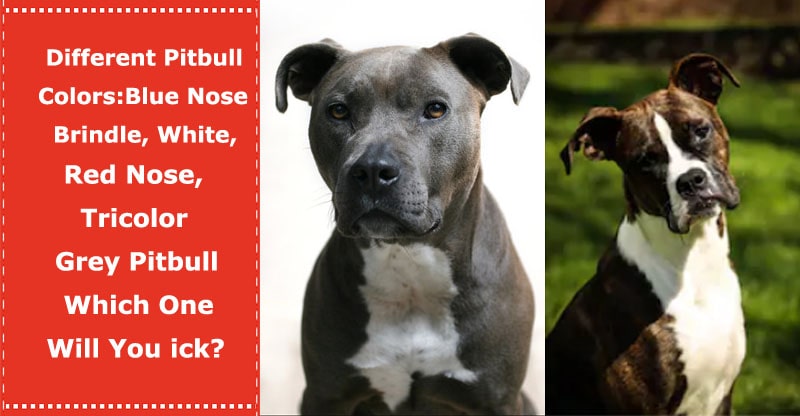 What’s incredible about Pitbull is that the Pitbull comes in a variety of colors as well as having four types of breeds that fall under its category? A Pitbull is a generic label for the four breed types, which are mixed breeds in most cases. The four have related features of both physical and personality. The breeds are the result of bulldog mixing with a terrier.  Just for a brief description of each Pitbull type, here’s the list:

As you have seen, Pitbull comes in four kinds with an assortment of colors. The markings are almost the same across all four types of Pitbull, meaning that the markings could be patches, spots, just to name a few, regardless of what you have it is an American Pitbull Terrier or the American Bully. But you will never see two Pitbulls with exactly the same markings. They may have the same color, but not the same marks. And that is what distinguishes Pitbull from other breeds of dogs.

Typically, a blue-colored Pitbull has white markings while a black Pitbull has markings either of white or brindle. Anyways, I will be discussing with you more thoroughly the different Pitbull colors and which one do you think is the one that you would love to have.

This dog has a blue coat and a blue nose, as the name suggests. You may not have seen one because this dog breed is uncommon. Indeed, seeing a dog with such a lovely blue coat color is quite rare. A blue pitbull is a mix of bull and terrier dogs. But if you expect to see a sky-blue or electric blue color, you’re wrong. It is a silver-gray to charcoal in color. Why? This is due to a recessive gene. One of the parents must be a carrier of the recessive gene that does not generate enough melanin for pigmentation to produce a puppy with a blue coat and blue nose.

What you need to know before getting a blue pitbull/blue nose pitbull?

How Much is a Blue Pitbull/Blue-Nosed Pitbull?

The American Staffordshire or the American Pitbull Terrier, in most cases, produce offspring with pure black or black with white specks. These white specks or marks are often seen in the chest region. This has been bred as a fighting dog, but it is also used as a hunting dog, a cattle driving dog, and a guard dog.

A properly trained Black Pitbull turns out to be a loving and obedient dog. So it can be said safely that a Pitbull party’s conduct depends on how its parents trained and brought it up.

How much is a black pitbull?

Brindle color can be described as the base being color brown and with stripes of dark brown and black. Some marks can be likened to a tiger’s while some dogs have blotchy marks. The brindle color was first seen during the early part of the 19th century when a fawn pitbull was bred with a brown dog. As a result, the pups had tiger-like stripes.

Unfortunately, up to this date, a brindle pitbull is still being used as a fighting dog. But the truth of the matter is that this dog is loving and loyal dogs which can be included in a family with kids.

How much is a brindle pitbull?

A white pitbull is uncommon, and there is a growing demand for it. It’s so cute to look at and besides that, it has a character that’s admirable as long as it’s trained properly. This dog breed also has a muscular built and has a glossy but not smooth to touch coat.

You can also find a white pitbull that has some markings of another color. The color of the eyes can be brown, black, red, and multicolor.

This dog breed has a record of violence, but these days, it is being bred as a companion dog. You can find a white pitbull that is friendly and caring to both kids and other animals. However, as a word of caution, its violent streaks are still there, and this is why training it as early as possible is recommended.

How much does it cost?

This breed of dogs is generally all red in color. It’s got a red nose, red lips, red eyes, red toenails. And since the color red is sometimes linked to violence and hot-tempered conduct, is a red pitbull / red nose pitbull a vicious and aggressive breed of dogs? Depending on how you raise your dog. If the dog is raised in a loving family, it will shine on the good side. But if it is raised to fight, it will, of course, dominate the aggressive side of it.

This dog is beginning to be admired by many, and it is no surprise that a dog lover who intends to own a pitbull will seriously think of owning a tricolor pitbull.

This is the pitbull family’s relatively new and rare color. This dog has three instead of the usual two colors. White, black, tan, red, lilac, fawn, chocolate, blue and more are combined. On her chest, paws, legs, face, nose, and tail, contrasting shades of colors are seen. You still don’t see much tricolor pitbull because this color has surfaced only lately.

The gene that is responsible for having three colors is a recessive gene of either of the parent.

What is the temperament of a tricolor pitbull?

Breeders believe that this dog carries with it a milder temperament in comparison with the other colors of pitbull.

The grey pitbull is also referred to as a blue nose pitbull which I have already discussed above. What the breeders are trying to achieve when they crossbreed is a pitbull with grayish to blue coat color.

So there you go, those are the different colors of Pitbull. They may vary in colors, but the common denominator among them all is the stereotype of being aggressive, biting, and violent dogs. Let me just stress, though, that they may have a streak of violence in their genes, ultimately it’s what the owners do to them that makes them either fierce or gentle pitbull.

Regardless of Color, What Type of a Fur Parent Should Care for A Pitbull?