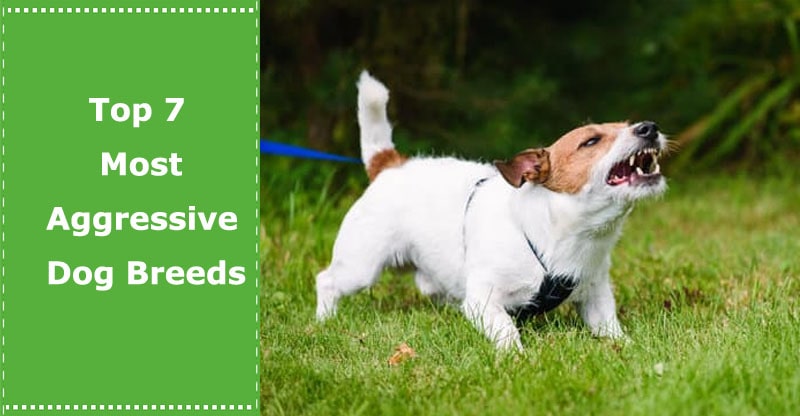 Dogs are known for being gentle and loving creatures. When these furballs grow up in a caring and loving environment, there’s little chance that they ever show aggression towards other creatures. All these dogs probably want is a good belly rub and some deep scratching.

But all creatures have their dark side and dogs are no exception. Getting zero to no love at all plus being mistreated pushes a dog to its limit and causes an aggressive and dangerous behavior. Among the many dog breeds, there are simply some that are more aggressive than others.

You may expect certain breeds to be aggressive, while others may completely surprise you. Each dog has their own limits, so don’t expect them to love you even when they’re not loved. To know which dogs are the most aggressive ones, here’s a list of the top 7 most aggressive dog breeds:

Despite looking quite aggressive, this breed is honestly one of the most intelligent and obedient you could ever have at home. To prove that, let me just tell you that these German dogs were usually used as farm dogs to herd livestock back into their safe spaces. In other cases, they were also tasked to pull carts across fields.

This breed has built quite a reputation for itself, with all the bite-related fatalities they’re responsible for. They have quite a muscular body that looks intimidating and always ready to attack. What makes Rottweilers even more aggressive is that they’re naturally territorial.

If the owner neglects the dog and won’t let them play out in the open, they will eventually become quite aggressive. Rottweilers are incompatible with owners who don’t really know how to calm themselves down and assert their authority over their pet. Because of this trait, Rottweilers also make good police dogs.

Just like the Rottweiler, this breed is also known to be quite intelligent, that’s why they were frequently used as herding dogs in the past. You might commonly see this breed alongside police or with the bomb squad, because their noses are powerful as well.

Their stance already shows just how strong and domineering they are. If properly trained, they can be the most loyal and obedient dogs you’ll meet. This means there should be minimal shouting or hitting to avoid triggering their aggressive side.

But if they’re neglected and not given proper training and socialization, they’ll show their canines as soon as they can. You may start seeing a bit of aggression beginning at the age of 6 weeks old. If left to their own devices at this crucial stage, puppies can grow into aggressive dogs, and the aggressiveness will then be difficult to eliminate through training.

Contrary to popular belief, this breed is really energetic, gentle, and loving towards its owners, even towards children. Some may not believe that this is one of the breeds that’s ideal for families because they’re intelligent and very much protective. Take all the negative stories you hear about them with a pinch of salt!

However, it is no surprise that this breed is on the list of the most aggressive dog breeds. In fact, this is a reputation that has caused the breed to be banned in a lot of areas. A lot of people are afraid when it comes to Pitbulls, especially because of their muscular limbs, which make them look very frightening.

There have been several researches that show just how vicious this breed can get. It has caused 230 deaths and has injured over 1500 people. If a Pitbull is not showered with love, it is not going to hesitate, but rather turn into one of the worst dogs ever quite quickly.

Here we have one of the most beautiful breeds in the world. Their coats are often a beautiful mix of white, gray, and black that definitely reminds you of winter. Not only that, their eyes are usually a deep color of blue that draws everybody in. Siberian huskies also quite popular for imitating the way their owners speak.

All these qualities make it quite hard for some people to believe that this dog has the tendency to become aggressive. Siberian huskies are known to have tempers that are similar to those of wolves in the wild. Just like wolves, they can be intimidating and stubborn when dealing with other living creatures.

If their owners are patient enough to train them, you’ll never see their dangerous and aggressive side, because it’s not really a common attitude. These owners just need to allot plenty of playing time and frequently take their furry pals on walks, so that they get to show their playful attitude.

Even when these dogs are simply standing, it’s pretty obvious that they’re alert and ready to charge at any time. Being very intelligent and obedient, these dogs are pretty easy to train and commands won’t be hard to impose on them. Their perky ears are a dead give-away that they’re attentive to everything.

If there’s one thing this breed is known for, it’s that they’re overly protective of their owners and won’t hesitate to attack those who appear to be harmful. These dogs are also known to be wary of dogs who aren’t really friendly.

It’s a good thing that their aggression can be kept at bay and will only be triggered if they’re neglected and not given proper training. A good walk and some playtime will be enough for this dog to be happy.

What really made Great Danes popular was Scooby Doo, as the cartoon character was a Great Dane himself. In the show, Scooby Doo was somehow a shy yet alert dog. He was loyal to his owners and didn’t hesitate to join them on all of their adventures. All in all, he was truly a great dog for adventures.

This is true to real life, because Great Danes are definitely loyal and intelligent. They also know how to be friendly and obedient towards other dogs. When given the chance to interact and play with other dogs, Great Danes prove to be extremely playful. Don’t be intimidated by their long legs, because these dogs are down to play.

This breed also knowns how to be aggressive, though. You’ll notice this as soon as they start barking, growling or biting incessantly.  Such reactions are merely the result of neglection and lack of training. So, there is no need to worry – aggressiveness occurs only when Great Danes don’t get enough love.

Last on our list is this medium-sized, muscular dog that’s always full of energy. Lots of owners love their boxer dogs because they’re loyal, friendly, and, most of all, obedient. They’re not hard to train and definitely won’t be hard to love. A pet you’ll love having at home.

Surprisingly, boxers are good at catching small animals such as birds, squirrels, and rabbits. They run quite fast and won’t have a problem going in zigzags if they need to. Their bodies are pretty muscular and strong as well. When it comes to running, boxers won’t let you down.

However, male boxers are usually the aggressive ones. They mostly show aggression towards other male dogs and won’t go down without a fight. To avoid encountering such aggression, all you need to do is train them and let them socialize enough with other dogs.

All in all, none of the aforementioned breeds start off as aggressive ones. They’re all innately loving and easy to deal with, because most of them are loyal and obedient towards their human partners. Aggression is not something you’ll see every day, especially if these dogs are well taken care of.

Owners just need to be patient and really find the time to train their dogs so they won’t become aggressive. Teaching them simple commands like ‘sit’ or ‘stop’ will be enough to show your authority over these dogs. Don’t hesitate to reprimand them nicely when they do something bad, so they know it’s wrong.

These dogs only need to be loved and socialize with other dogs in order not to develop aggressive tendencies. No dog would want to harm another creature if they don’t need to. If you truly have neglected them, don’t expect that they’ll still be loving and happy.