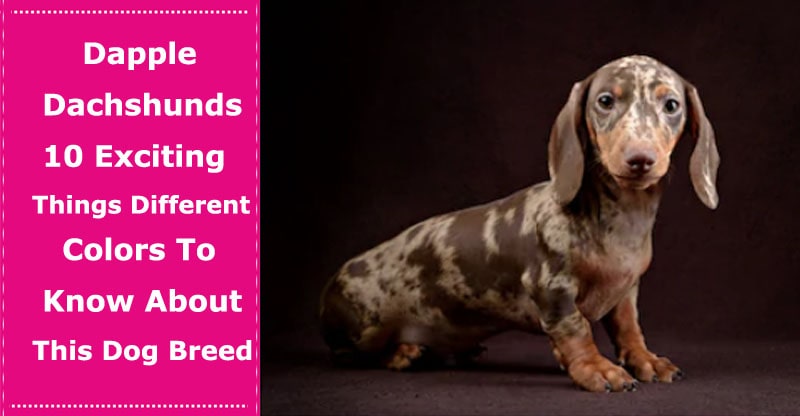 No one can deny that dachshund dogs look so cute with their small size. They tend to have a long muzzle, lengthy, and droopy ears. They can also appear with a distinct tail and generally come in black, red, white, chocolate, or gray fur shades. Some Dachshund is spotted, some have tan markings on them, and others are dappled. I’m going to show you 10 exciting facts about a dapple dachshund you probably didn’t know in this article. Let’s get into it.

2. A Standard Dapple Dachshund Is Half As Tall As A Bowling Pin

For those curious about a dapple dachshund’s normal height and weight, this is the exciting fact for you. Dapple dachshunds have a standard height of between 8 and 9 inches and a weight of between 16 and 32 lbs. This implies that these lovely dogs are half the size of a bowling pin. Aren’t they cute?

Dapple dachshunds are also available in three sizes. The standard, the toy, and the miniature. Of course, with an average height of only 5 to 6 inches, the miniature ones are smaller. Their standard weight is approximately 11 lbs. and below.

When two dappled dachshunds reproduce, they will pass their merle gene that allows them to generate double dapple dachshund puppies. As a result, these little ones will have more intricate kaleidoscopic patches of color along with huge white areas on their bodies.

4. Dapple Dachshunds Can Have Blue Eyes

Although double dapple dachshunds are mostly associated with health problems such as vision loss, there is a paired dapple dachshund with an icy blue eye on the face. This distinct feature can be amazing, and it is one of the reasons why some breeders of dachshund attempt to combine two dapple dachshunds.

The most common range of dapple dachshund is the smooth-coated dapple dachshunds with short, shiny hair. They are easy to groom because  they only require a quick brush once weekly. Like that, their pretty coat only shed lightly compared to other varieties.

You can use a brush that features a slicker brush every few days to remove dirt and loose hair from their coats to groom short-haired dapple dachshunds. Brush their coat with a soft bristle brush, afterward. You don’t have to bathe your smooth-coated dapple dachshund, except that after rolling into something he gets extra dirty and smelly. You can simply wipe their coat with a damp cloth to help remove dust and dirt to keep them clean.

Despite their cuddly and cute looks, miniature dapple dachshunds are mostly described as being clever, tirelessly energetic, curious, and high-spirited. They love walking or playing and they are prone to boredom if left alone which leads them to chew things.

Dachshunds are known to be dogs that are independent, intelligent and playful. They are originally bred for hunting, which explains why these cute dogs love the outdoors. It’s a great idea to get them to a safe place during their playtime where they can run around freely, chase other dogs, bark and explore the ground by digging a few holes.

7. Dachshunds Are Bred For Hunting Animals Like Foxes and Boars

Dachshunds are originally bred for hunting which evolved during the 16th century in Germany. Their sleek, short frames together with their incredible sense of smell which enable  them to hunt animals above and below the ground. They can also track animals for days. Different sizes of dachshunds have been developed over the years, including the large ones best suited for hunting boars, and the smaller variety ideal for hunting foxes.

8. Dapples Are Hard To Notice At Red Dapple Dachshunds

Red dapple dachshunds have a dark red coat that almost looks like a rust color coupled with darker spot colors. Because of this, even experts may find it hard to notice dapples in an adult red dapple dachshund. Sometimes a red dapple in their coat can have a lighter dapple swirl that gradually disappears as they mature. One of the rare ways of distinguishing a red dapple dachshund is that when they have dapple on the eye, some of them have one or two telltale blue eyes.

Dapples come in different color combinations which makes dapple dachshunds looks so cute and very adorable. Here are some of the most common combinations of dapple colors, see which combination is your favorite:

10. Dachshunds Are Better In Pairs, But Not For Both Dapple

In general, Dachshunds are social in the social dog category, making them better in pairs. Most dachshunds don’t like to be alone, but they are also known to be prejudiced and prefer their breed. While dapple dogs may reproduce double dapple puppies, due to genetic problems there are instances where health problems occur. So, if you’re planning to pair your dapple dachshund with other dogs, it is better if it’s a plain dachshund than another dapple.

Dapple Dachshunds with these dapple color combination has longer hair than compared to a regular Dachshund. Its colors cover more areas throughout the fur with small spots, unlike patterned Dachshunds. You can see their coat as silkier than others, and they mostly have white fur on the chest and black nose.

Wild boar dapple Dachshunds have a comparable color to a wild boar; what the color indicates. It features dark, silver-like gray shades, black tones and uniformly mixed-light tones of tan. Most of the dachshunds with this combination of color have tan feet, dark eyes, and tan on the snout, plus black nose. It is also most common in wiry-haired Dachshunds

Compared to other dapple color combinations, blue & tan piebald dapple Dachshunds doesn’t have evenly mixed colors and not as speckled. They mostly have largely patched combination of colors with white as their base. Blue & tan piebald dapple has huge patches of blue colors that might look like smoky gray. You can also see a small amount of tan on them, mostly on the face. They can have blue or dark eyes as well as a black nose.

Silver dapple dachshunds mostly have light silver fur as the dominant color and darker silver to bluish color as the secondary. This dapple color combination commonly appears along with cream-colored feet mixed with tan, eyebrows, and snout. A silver dapple commonly has a black nose and dark-colored eyes.

Red dapple dachshunds feature a combination of dark red that is nearly rust-like in color. Shades of darker patches on their body are apparent as well which is common to a smooth-haired variety of dachshunds, longer-haired, or wiry-haired types. In red dapple, it is common to have a lighter colored chest area which sometimes looks like a tan. Dapple dachshunds with this color combination have brown to reddish color along with a black nose.

Dapple dachshunds with a combination of light and dark browns are among the category of chocolate dapple. This dapple color combination looks like an unmixed milk chocolate milk since it may include some reddish tan patches of fur mostly around the feet and snout. Chocolate dapple most commonly appears with light to medium-dark brown eyes.

Similar to black & tan, dapple dachshunds with black & cream dapple mostly appears with a black coat covered with large cream colors. They have a brown snout, tan feet, and black nose. Their fur is also relatively longer and softer compared to the smooth-coated variety.