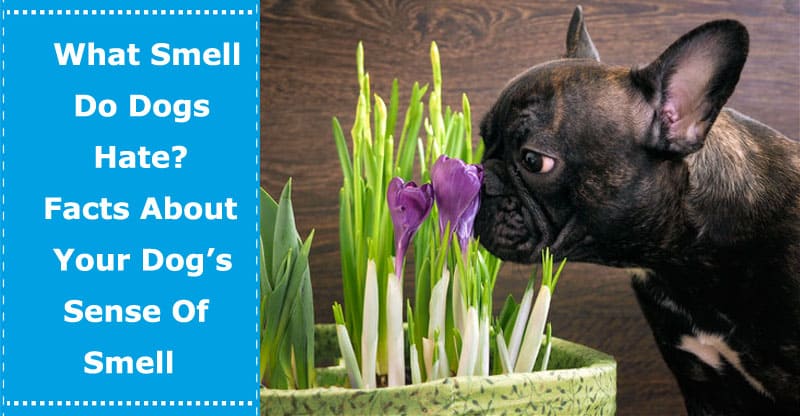 Home
Other
What Smell Do Dogs Hate? Facts About Your Dog’s Sense Of Smell

Do you ever wonder why your dog tends to sniff everything that it sees, be it a random flower during your routine walk in the park or even trash at home? Dogs are very much curios about everything that they see, and in order to explore things they rely a lot on the use of their nose, which helps them go beyond what they see with their eyes.

A dog’s sense of smell comes with a lot of wonder; they tend to use it in order to familiarize themselves with the environment that they’re in, the people that are with them and even the type of situation they are facing.

Below are some Amazing facts that you don’t know about your dog’s sense of smell:

1. Dogs’ sense of smell is way better than humans’

According to studies, if the humans’ sense of smell is compared to that of dogs, it is said that dogs smell a hundred thousand times better than humans do.

Dogs’ sense of smell is so strong and sensitive that they don’t only distinguish between what smells good and what smells rotten, but they also can dig deeper than that. According to a well-known veterinarian named Michael T. Nappier quoted, “A dog’s sense of smell is its most powerful sense, It is so sensitive that dogs can detect the equivalent of a 1/2 a teaspoon of sugar in an Olympic-sized swimming pool.”

2. Dogs depend on their sense of smell for survival

Not only do dogs use their sense of smell to get to know the environment that they live in, they also use it to avoid possible threats in their daily lives.

Dogs can judge something beyond its aesthetic features, their sense of smell can break something up until its tiniest particles, which also means that dogs will be able to determine if anything around them can cause danger.

Since dogs’ sense of smell is very much sensitive, no matter how much amount of perfume you put on, your dog will be able to smell every inch of you. This distinct smell that humans have are the indication that dogs use in order to differentiate one human from another.

Our skin has glands which secret fluids like sweat, especially in the areas which are not commonly seen, such as the armpits. Because of this, humans tend to grow a lot of bacteria in those areas, which is why regardless of how hygienic you are or how often you use deodorants, your dog will still be able to smell beyond the perfume.

4. Dogs can smell things even if those can’t be seen with the naked eye

The best example for this is the use of police dogs in finding missing persons or identifying If there’s a threat around, such as bombs or even illegal drugs. By merely giving the dogs a whiff of any smell that they need to retrieve, they will be able to follow where that smell has been.

5. Dogs’ sense of smell is not only for picking up scents, but also for sensing strong emotions

For people who are very much scared of dogs, no matter how much you try to conceal it, dogs will be able to sense the fear in you.

When humans are under a lot of stress or experience strong emotions such as anxiety, fear or even sadness, their heart rate and blood flow tend to speed up, which often results in the secretion of chemicals through the skin or excessive sweating. This chemical secretion caused by strong emotions produces a strong scent that dogs use to determine the current state of the humans around them.

Aside from mind-boggling facts, have you ever wondered what scent or aroma your dogs hate? As mentioned above, dogs hate the smell of humans, but that doesn’t mean that they love their owners any less because of their odour. What other smell does your dog dislike?

8 Common scents what your dog hates:

This type of scent is very much refreshing for humans, which is why it is often used in cleaning agents at home, air fresheners for cars and essential oils for diffusers.

The main reason why the scent of citrus is very common in every household is because this type of aroma is usually strong, which indicates that the smell will last long.

This aroma may be appealing for humans, but it is very much the opposite when it comes to dogs. As previously mentioned, citrus gives off a very strong smell, and since dogs have a way more sensitive sense of smell than humans, a pungent aroma such as citrus might cause irritation in the dog’s respiratory system.

Typically used in cooking, vinegar has an aroma that is not pleasant even for humans. Because of its strong acidic smell, dogs dislike it as well.

However, vinegar can also be useful for dogs in some way. Most dog owners place vinegar around the house that they don’t want their dogs to access. This helps prevent dogs from urinating in those places. In addition to that, apple cider vinegar is used as a substitute shampoo for dogs.

Apple cider vinegar will help in reducing that musky smell that dogs normally have, but since apple cider is twice as pungent as a normal vinegar, it is better to mix it with normal dog shampoo and to rinse well.

Food spices such as chili tend to give off a very strong aroma that easily wards off dogs. Because of the strong smell that this spice emits, has any direct contact between chili and your dog can cause immediate respiratory issues or excessive sneezing for your furry pal.

Often used for disinfecting wounds, the aroma that alcohol gives off will depend on its content. Regardless of how strong or how weak the smell of a certain type of alcohol is, that aroma will still be hated by dogs.

If your dogs get wounded or injured, it is not advisable to use alcohol as a disinfectant, because once the pet has a close encounter with it, the smell of the alcohol can become an additional source of major stress and make the pain experienced because of the wound even worse. It is better to use water to clear off the wound first and then pay a visit to the vet for proper treatment.

A cosmetic product that women normally use to paint their nails, nail polish is made up of different chemical compounds which include formaldehyde and Isopropyl alcohol. These chemicals give off a strong smell that even other humans can’t stand.

Due to the number of chemicals that the substances contain, the smell that they give off also has a chemical nature, which pretty much repels dogs. When using cosmetic products with high chemical contents, it’s better to look for something that is odourless or better yet keep these products away from your dogs to avoid serious damage to their respiratory system.

Most products used in cleaning houses contain chlorine and ammonia. Almost all of those products contain a lot more chemicals that are not only harmful to humans, but are also very much dangerous to dogs.

Close contact with these types of products can damage your dog’s oesophagus directly, which can eventually turn into extreme harm for the respiratory system and possibly pose a threat to your dog’s life if not treated properly.

It is highly advised to keep your dog outside the premises during cleaning day, to avoid any accidents with the cleaning products used and to prevent dogs from inhaling the dust during the cleaning process.

In order for perfumes to have a long-lasting fragrance, their smell is usually strong. Other perfumes also contain chemicals that may not affect humans, but can cause great damage to dogs due to their sensitive sense of smell.

Other than the pungent smell caused by perfumes, dogs also differentiate and recognize humans based on their distinct smell; and when it’s layered over by perfume, your dog can become very much confused, as it may not recognize your natural aroma.

As the name suggests, mothballs are used to keep moths away, but they are also an uncommon tool used to repel dogs. However, it is not advisable to use mothballs, since they contain numerous chemicals, some of them being even poisonous; this makes them potentially deadly for both dogs and humans.

The use of mothballs is very much discouraged especially when there are puppies around. Their sense of smell is not as developed as that of adult dogs, and since mothballs are new to them, they may have the tendency consume them the same way they tend to consume anything that crosses their path. If eaten, mothballs can cause instant death, though.

A dog’s sense of smell has different types of uses that also benefit humans in a lot of ways. Not only can dogs sense danger, they can also track down missing people or even detect the presence of explosives in a particular area.

Humans need to pay attention to their dogs’ high sensitivity in smell, because a lot of products that pet owners use in their daily lives can cause serious damage to a dog’s respiratory system. Dog owners should do their fair share of research in order to find out what needs to be avoided and what is safe around dogs.