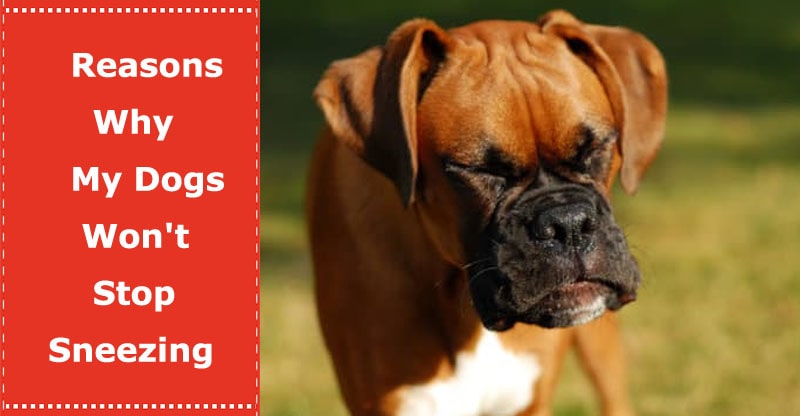 Plenty of times dogs go “achoo.” For us dog-lovers, even our dogs’ sneezing is cute and adorable to watch. But, of course, the question must be lingering in your mind, right? What are the causes responsible for dogs to sneeze?

Although we are a bit used to expecting that sneezing, for humans, is due to colds, sinus issues, or allergies, dogs are not always like us. A sneeze or two from here and there is a normal happening for a dog, besides we both know a sneeze once in a while makes us feel some relief. However, when it comes to repeatedly doing it, it may already be an indication for some deeper or more serious reasons.

Why My Dogs Won’t Stop Sneezing

1. Foreign bodies in the nose

You can probably already tell what this means just by reading the word “foreign.” If not, well here’s a bit of description about it. Foreign bodies refer to the particles or anything in your dog’s nose that should not be there in the first place.

They could have gotten it from sniffing too much since they, undeniably, love doing that. And if your furry pal’s sniffing turns into sneezing, then you’ll know that most likely some dirt, pollen, soil, or something might have stuck in its nose.

This reason is something that dogs have in common with humans because sneezing is our bodily response to expel the foreign body in our noses. This may be quite common, but sometimes this could also end up to a visit to a vet. If you’re curious, well, there’s a long list of stuff that veterinarians removed from poor dogs.

Don’t think that dogs are exempted from suffering infectious diseases because they are one hundred percent not!

Infection may start from a bacterial, chronic, or viral cause, but most of the common infections that dogs get, which leads to sneezing are called upper respiratory tract infection. This happens when your dog gets invaded by the opportunistic fungus named Aspergillus that may come from dust, ornamental plants, soil, or other outdoor materials.

When this fungus or Aspergillus successfully get into direct contact with the nose or sinuses, it creates a nasal Aspergillus infection which symptoms include sneezing, bleeding or discharging nose, and swelling.

Once you take a hint that your dog is experiencing this type of situation, the best step is to get your dog checked by a professional, so that you get information about the proper medication your dog needs to undertake.

When your dog sneezes out of excitement or anticipation, you should call that the “playing sneeze” or the “excited sneeze.” You should be expecting this to happen a couple of times when your dog is playing, especially if you’re a small-breed dog owner and for that, this is a cause that you shouldn’t be alarmed about because it is normal and it is far from danger for your fuzzy angel.

Sneezing is their way to symbolize that they are pure of delight in themselves, so there’s no need for you to get worried or troubled. You should be quite happy when you see your dog get a sneezing fit during play because that means it’s getting loads of enjoyment!

Some reports claim that their dogs make sneezing sounds when they’re getting taken out for a walk or a run, and when they’re given a treat. But if there’s no apparent reason for them to sneeze or the sneezing becomes too lengthy, you should perhaps consider it unusual already.

As much as environmental factors from outside can trigger sneezing to your dog, so does indoor household products can. Just like humans, dogs are not an exception to the hazard brought by chemicals.

Indoor irritants or products that can cause sneezing to your dog include perfume or cologne, secondhand smoke, cleaning materials, fiberglass, or spray-able aerosols such as insecticide or air freshener.

We all know how gifted dogs are when compared to them with their sense of smell; our sense of smell is absolutely nothing to be proud of. They’re just naturally born with the ability, can’t do anything about that. The best reminder of this are dogs that aid police forces. They can’t be there for nothing, can they?

But this particular talent that your dog has is also one of the reasons why it’s susceptible to stuff like irritants, chemicals, and such. Also, a highly sensitive nose leads to the tendency to sneeze when they wrinkle it due to the curling of their lips during play or activity. You know, dogs are not immune to tickles too.

Some of the time, your dog might be using sneezing as a way to communicate with you. It could be an attempt to tell you something – amazing weird isn’t it?

You could consider this a fact when you’ve observed that your dog’s sneeze is accompanied or followed by a head bow done in a slightly excited way. Now, there could be two possible explanations to when they do this with the company of another dog – they want to play with the other dog really bad, or they pose no threat to the other dog.

Considerably similar to the upper respiratory tract infection, an infection to the tooth or its root may also cause your dog to go into sneezing galore.

Mostly, the third upper premolar is the tooth that causes sneezing when infected. This is because of its location, which is very near to the nasal cavity.

If you’re quite the smoker, I highly suggest you stop smoking around your dog, especially if it’s a long-nosed breed of dog, because it might cause a lot of problems for your furry pal. One of those problems is a nasal tumor that is mainly caused by secondhand smoke.

This is one of the serious causes that you should look out for if your dog is having some persistent sneezing. This is diagnosed by veterinarians so if you’re getting a hunch that this might be the problem your dog has, it is essential to get it checked as soon as possible.

To make it quite simple, imagine those annoying little mites inhabiting your dog’s nasal passages. Those are what you call nasal mites or scientifically known as Pneumonyssoides caninum.

These bugs may be small in size, but their bad effect on your dog is tremendous. They can cause bleeding and chronic discharges from your dog’s nasal cavity. Some of the sources of these bugs are from soil or another infested dog. Mites can be detected by using a microscope for nasal swabs.

Dogs love the outdoor world, playing and running around like they own the place. It’s lovely to watch them all day but as delightful as that image sounds; the environment is also a dangerous place. Don’t get too afraid though, you might lock them up inside the house and I’m telling you that’s not a very bright idea.

All I’m saying is that many environmental factors could cause allergic reactions to your dog – and those allergies are quite the sneeze-maker. There’s inhalants, irritants, pollen, specks of dust, and particles all around. That stuff can cause sneezing, and not only that because it could also be accompanied with unwanted symptoms such as watery eyes, chewing of paws or skin, and around-the-body itching.

Is your dog the type of breed with adorable flat faces and frequently sneezes? Do you want to know why they sneeze a little bit more than those with longer snouts?

Brachycephalic breeds of dogs are those with shorter skulls, snouts, and/or muzzles. Examples of which are Pug, Boston terrier, Shih Tzu, and Bulldog. Since their nasal cavities or passages are somewhat compressed, they become more vulnerable to the influence of sneezing when exposed to particles or irritating materials and upper respiratory tract infections.

As pet parents such as yourself, you should think of nothing if your dog goes into a sneezing fit. The reasons above may help you get proper knowledge about your pet dog during times like this.

It’s never bad to take extra care to our dogs or be extra attentive to their every sound or action. If you notice that your dog is sneezing a lot more than usual or normal, make sure you pay attention to get a better idea of what the reason may be.

More than that, if you think your dog is sneezing more than usual that raises concern, maybe a trip to the vet is recommendable. Get to the bottom of it before it worse becomes worst for your beloved best friend.

But hey, no one can ever deny how much dogs look funny and cute at the same time when they sneeze.