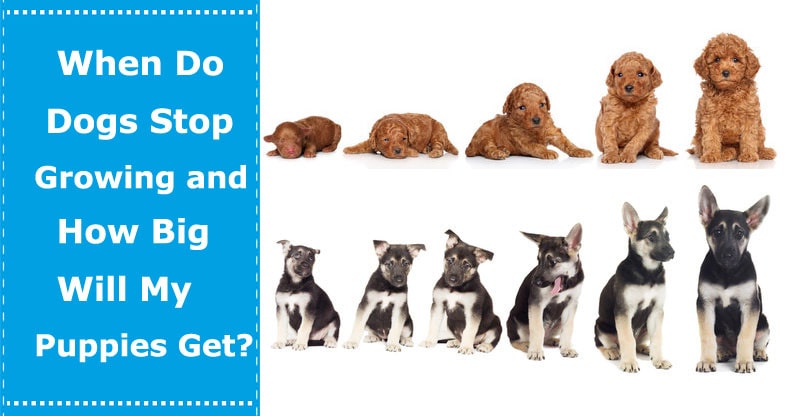 Home
Other
When Do Dogs Stop Growing and How Big Will My Puppies Get?

If there is one question that dog and non-dog lovers commonly ask is that “when do dogs cease to grow? People are only curious to find out when puppies attain their maximum height. This is particularly true for those planning to get a new puppy. Issues such as when are the growth spurt of puppies and when does it end. This article will focus on the canine’s development cycle and whether it varies depending on the dog’s breed.

How Quickly Do Dogs Grow?

Puppies grow rather quickly. One day, you see them as very fragile and helpless fur babies with their eyes shut, and then they start standing up and walking and running around and beaming with energy in just a matter of weeks. But it’s not all dogs that grow at a similar pace that makes them unique. The lesser breed dogs, in reality, tend to develop rather fast than the bigger breeds of dogs. Why? This is because it takes more time to develop the bone and muscle structures of the big breed dogs.

Even before the age of one year, small dog breeds such as a Maltese may be regarded mature. On the other hand, it can take up to two years for the big breed dogs to attain their maximum height.

The larger dog breeds such as a Golden Retriever requires a special diet to grow healthy. If you deprive it of the special diet or nutrition produced specifically for big breed growing puppies, it may not grow properly its muscles, bones and joints. Dog food like Blue Buffalo Wilderness High Protein Grain Free, Natural Puppy Large Breed Dry Dog Food is one instance of a suitable puppy diet.

Moreover, in terms of physical development or maturity, not only are the small dog breeds quicker, but they also tend to grow faster in the cognitive department. So it doesn’t necessarily imply that when a dog is big that it has reached its maximum height and cognitive development. That’s why you have to choose your puppy’s right food formula. Eukanuba Small Breed Puppy Food is an instance of extremely nutritious puppy food for small dog breeds.

The Developmental Stages of Puppy:

First Stage: The Neonatal Period ( 0 to 2 weeks of age): A puppy cannot see yet at this stage. What it does are sleep and drink milk from its mother. If the mother is not available for some reasons, the puppy is fed with a milk replacer such as Well & Good Puppy Milk Replacer. Its form of movement is by crawling, and it is completely dependent on its mother for care such as cleaning. It will also start to learn simple social skills and ranking process.

Second Stage: The Transitional Period ( 2 to 4 weeks of age): At this time, a puppy begins to play with its littermate. Its eyes are now slightly open, and it is beginning to discover its surroundings. It can now stand, walk, and its sense of hearing is slowly developing. You will also start to notice that its milk teeth are beginning to come out. So many things happen to a puppy at the transitional stage. For example, it learns how to eliminate without its Mom’s stimulation. Weaning also begins at this stage as a puppy begins to eat solid food such as Wellness Core Natural Grain-Free Dry Dog Food Puppy and Royal Canin Puppy Appetite Stimulation Canned Dog Food.

Third Stage: Socialization Period (4 to 12 weeks of age): This is the time when it is essential to introduce the puppy to other dogs and to people. Social interaction is emphasized so the puppy will grow up learning how to behave well in different scenarios. By five weeks of age, you will notice how the puppy enjoys playing with people and with other dogs. But taking a puppy from its mother and its littermate is not recommend at this age yet because this is the time when it begins to learn to inhibit play biting behavior.

You can start potty training your pup by seven weeks of age. It’s essential to take it out in the morning when you wake up. And then, during the day, about six times or even more. If you can’t bring it out often, by using Petmaker Puppy Potty Trainer-The Indoor Restroom for Pets, you can teach it how to pee and poop in some areas of the house.

And your puppy will go through a phase called ‘ fear period ‘ by the age of 8-10 weeks. With encouragement and beneficial training sessions, this fear conduct can be solved. But when your puppy works slowly, the best time to start training is between 9 and 12 weeks.

Fourth Stage: Hierarchy Establishment or Ranking ( 3 to 6 months of age): This is the age when puppies sort of test where they belong among its littermate. Puppies learn to understand ranking, like who is the dominant figure and who are the submissive ones. This is when you will see who will turn out to be shy and timid and who will be the alpha in a pack. There is also another period of ‘fear stage’ but which is considered to be a normal part of growing up.

Teething and chewing are noticeable at this age. You can give your puppy N-Bone Puppy Teething Pumpkin Flavor to help with the discomfort and pain while teething.

Fifth Stage: Adolescence ( 6 to 12 months of age):  This is the stage when your puppy is already aware that it is a part of a pack or group of dogs and people. You can expect your puppy to establish its ranking by acting as an alpha, but you have to let it know that it has to submit to you or else your leadership will be challenged. Teaching it obedience training and some tricks are best done at this stage.

Sixth Stage: Social Maturity ( one year of age onwards): This time, your dog has already reached its maximum height and social maturity. But go on with training so your dog will continue to be a positive member of society.

How Big Will My Puppy Get?

Some of the dog breeds that fall under this category are Maltese, Chihuahua, Shitzu, among others Assuming you don’t know your puppy’s birth weight, you can still approximate its adult weight more or less.

Small breed dogs such as Charles Spaniel, Pug, French Bulldog, among others are getting bigger rather quicker than big breed dogs but not as fast as toy breed dogs. They earn weight every day from 5 to 10 percent or an average of 5 to 8 ounces a week. Here’s a table showing how big your little puppy is going to get:

Some of the dogs that fall under this category are Border Collie, Bulldog, Cocker Spaniel, among others. Here’s one of the methods to find out how big your medium-sized pup will get:

It will take an average of one year to 18 months before it reaches its maximum height for big breed dogs such as Golden Retriever and Bloodhound. Here’s how to figure out how big your large-breed puppy is going to get:

When Do Dogs Stop Growing?

Factors that Affect the Growth of Your Puppy:

Apart from the breed of your puppy, there are other factors that determine its growth, such as gender. Male dogs generally grow bigger than female dogs.

Then dogs that are neutered or spayed at a young age tend to increase in weight and height. This is because these medical processes change the chemicals in the dog’s body, making them bigger. That’s why it’s not recommended that you neuter or spay your dog before it’s fully grown.

Food plays a vital role in your puppy’s normal development cycle. Puppies require high-quality dog’s food to grow well. Poor nutrition can halt the puppy’s proper development. Read the labels well when choosing the right food for your puppy. There are breed-specific puppy foods to guarantee your pup’s proper growth. Examples are the following:

As a puppy owner, it is reasonable to get curious as to how big your dog will get. Note that the big breed dogs grow slower than the smaller ones. And apart from the size of the breed, variables such as sex, food, spaying, and neutering may influence the puppies ‘ general development. Here is a comparison table among the breed sizes: