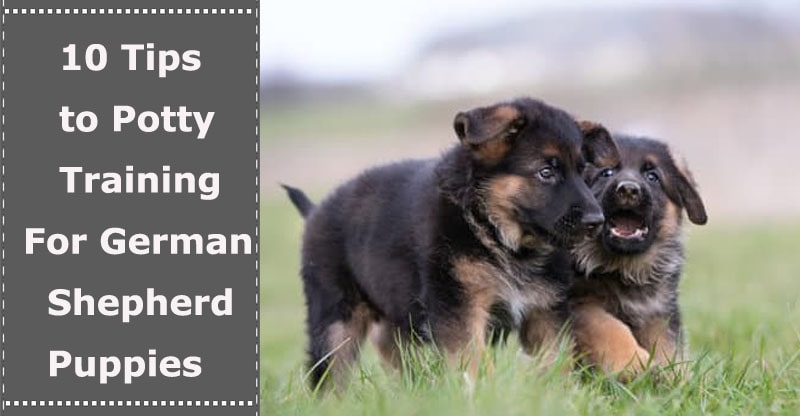 Dogs are known to be man’s best friend, other than being adorable dogs give so much more that sometimes people don’t even deserve to have them.

Getting a dog is one thing, but what comes after it is a pretty hard task, especially for first-time dog owners.

One thing that people usually dread is Potty Training.  We all know that this is far from magic, your pup won’t be able to learn it overnight and it will require a lot of patience and determination coming from you.

By following these ten quick tips in Hassle free potty training your German Shepherd dog, you’ll be able to learn the easiest way of training a German Shepherd pup without losing your mind in the process.

Here are some of the useful tips and things to avoid doing when Potty Training your German shepherd puppy:

1. Start at an Early Age

We all know that a German shepherd pup can easily steal your heart but don’t let that cuteness blind you from the fact that they need to undergo training early this stage.

It is crucial to input discipline at an early age because when it’s too late, your German Shepherd might not be easy to command anymore. When they grow up in an environment where they get things their way, they form a sense of dominance, and instead of you controlling your dog, they will have control over you.

Pups are just tiny beings they don’t find it difficult to stay inside crates; this is an advantage for owners they don’t have to worry about any “accidents” lying in their home once the pup is settled inside the crate.

However, owners should not let their pup defecate inside the crate, one sign that a pup needs to go is when you hear soft whimpers or crying.

You will need to really make time for your pup and will even need to sacrifice a few sleepless nights when undergoing training.

For German shepherd pups, it is advisable to take them outside twice a day; during day time and before going to sleep at night.

Post-feeding it usually only takes 20minutes for them to digest their food, so it makes more sense for owners to take their dog out during this time.

Remember that owners need to be consistent in doing this routine, your pup will be able to make this as a habit as long as the action is repetitive.

In the early stages of potty training, pups access inside the house should be limited to avoid “potty accidents.”

This practice will make the pup realize that the inside of the house is not the place to defecate.

Giving limited access doesn’t mean that the German shepherd pup needs to be in the crate majority of the time, the owner will need to find a portion inside the house in which the pup can move and play freely.

During this early stage expect that there will still be accidents but at least those “potty accidents” will just be happening in the area where the pup is allowed and not in random places inside the house.

While caring for a German shepherd, you will see that they have different signals or motions indicating that they want to potty. The owner will need to observe their dog’s behavior in order to pinpoint their signal.

The most typical indication that a dog wants to be let out to do their business is soft whimpering that may also sound like soft crying; this usually occurs when the pup is inside a crate.

The owner might see the pup close to the crate’s door and whimpering, this signifies that the pup wants to be let out to defecate.

However, in case the pup is not enclosed in any crate the common indication that they are about to potty is when the pup is going round in circles, seems restless and does nonstop sniffling or walking in an odd way.

5. Every good behavior deserves a Reward

German Shepherd Dogs are pretty much like human beings; they have feelings too. If you see that your pup is doing his best during the training, then that pup needs to be rewarded.

It doesn’t matter what type of reward is given; it could be a treat, extra kisses, or even a surprise visit to the park.

During this time constant affirmation is very much needed when the pup is doing the right thing it is best to acknowledge it.

Giving reward can also boost the pup’s confidence, and other than that, it will give the pup motivation not to lose interest in the training.

As we all know, German shepherd dogs are not built the same. They may be of the same breed, or they all are dogs, but their brains and body don’t get to learn new things at the same time.

Never compare your pup’s progress to another dog, this may often lead to frustration, and the pup is the one that’s going to be punished for this. Accept your dog’s pace and work your way around it.

This doesn’t mean that you won’t enforce discipline during the training but rushing your pup into learning new things won’t help either.

7. Avoid rushing your dog when its “Go time.”

Training your German Shepherd dog to potty outside may seem unusual to the pup at first.

They will need time to adjust, and as we all know, dogs tend to find their spot first before defecating.

Rushing your dog might create nervousness during the process aside from that it might cause an issue with the health as well.

Who wants to be rushed when doing their business anyway?

8. Have a Positive Attitude

Potty training will require work from both the owner and the German shepherd dog if the owner is not taking the matter seriously expect that the pup will do the same.

From the word training, every owner should know that they will need to sacrifice some of their personal things to make way for this.

Dedication is a huge part in order to train your German shepherd dog successfully. Admittedly there will be many moments where it can be rough and very much frustrating, especially when training a pup.

In the beginning, there will be a lot of struggle since pup tends to horse around and even when you’re already in the process of training for them, it seems like you’re just trying to play. However, as days go by, they will be able to learn the difference between playing and the ongoing potty training.

Frustration is accepted, but making your dog feel your frustration through violence or through scolding is never a good idea. The training is meant to create a bond between the owner and the dog, but enforcing punishment may create a rift or fear instead.

As mentioned getting a dog is a pretty easy thing especially when it’s as adorable as a German Shepherd dog however making sure that your dog will grow up to be well trained is a whole different story.

The common reason for unsuccessful training is when the owner loses patience and eventually gives up.

Training a dog where to defecate and observing its behavior when it wants to defecate is very much complicated.

Owners will need to instill in their minds that no matter how smart a dog is things like this can’t be taught overnight.

No matter how hard or how frustrating it gets, training will only be successful if the owner believes in their dog.

10. Don’t forget to Enjoy every minute of it.

Another common mistake that owners do during training is pressuring the pup into learning the training as quickly as possible.

It will be better to have a lighter and a more loving environment when doing these kinds of training in order for the pup to have a more relaxed mood and once they’re relaxed, it will be easier for them to obey and understand the premise of potty training.

Dog lovers will only be the one who can relate to this especially people who owns German Shepherd dogs, once you become a dog owner you don’t see them as your pet but more of a family.

Potty training your dog is almost the same as doing it with your own child, especially when the training is successful. Even if it’s a simple task, it is considered as one of the most critical milestones in a dog’s life.

During the whole duration of the training, the owner and the pup tends to grow closer and have a deeper connection.  Having a bond with a pup, especially a breed which is as loyal as a German shepherd is a dream come true for every dog parent.

Owners need to keep in their mind that dog’s age twice as fast as a human being does, every minute and every milestone that they accomplish should be celebrated.