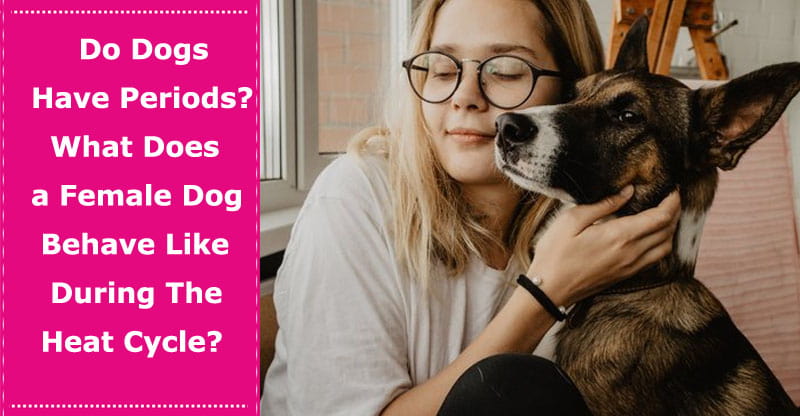 Home
Behavior
Do Dogs Have Periods? What Does a Female Dog Behave Like During The Heat Cycle?

It is not unusual to hear new dog owners ask the question- ‘do dogs also menstruate?’ Like all mammals, the answer to that question is ‘YES’. Dogs do menstruate, but not every month. Their menstrual cycle is often referred to as ‘estrus cycle’, or in simple terms, going in heat.

Your female dog will become sexually mature between the age of 6 and 18 months. Normally, the smaller breeds such as Maltese can have their first menstruation as early as 6 months of age, while larger breeds such as Golden Retriever can have it at a much later time – roughly at ten to fourteen months or even later.

When your dog is in heat, that signifies that she is ready for mating, and hopefully ends up producing a healthy litter. But the timing of copulation is of importance in order for your dog to get pregnant. In this article, I will be talking about the estrus cycle of dogs, the perfect time to mate and the behavioral changes that go along with the cycle.

Do dogs have periods?

1) The heat cycle of your bitch:

Physically, you may notice that the vulva of your bitch begins to swell and may already start to bleed. If your dog sleeps with you, you will notice some light pinkish spots on your beddings.

You will also notice that your dog begins to lick her vulva oftentimes in a day. This means she is gradually getting ready for mating, but not just yet.

This time, you will see the bloody discharge turn brownish or clear. There are numerous behavioral changes you’d also notice in your bitch.  First, becoming flirty with the male dog is very apparent. Second, your bitch will flag her tail as an indication that she is more than ready for mating. Third, aggressive behavior to other bitches becomes normal, as they long for the attention of male dogs.

It is funny to see bitches ‘mate’ or hump their owner’s legs if there are no males around to flirt with. Humping is a sign of sexual aggressiveness and normally happens during the estrus cycle.

This is the stage which is referred to as ‘in heat’, and as the term implies, your bitch is really hot and ready to make out.

2) Are there abnormalities in the heat cycle?

3) How many times in a year does your dog go into the heat cycle?

Most often than not, your female dog will go into heat two times a year. The interval between the two heat cycles is usually six months. However, as a dog owner, you also have to understand that not all dogs are the same. Some smaller dogs may go into heat three times a year, while larger breed dogs may only go into heat once a year only.

It is normal for dogs to have irregular heat cycles during the first two years of their life, as their bodies are still adjusting to hormonal changes.

4) Is there such a thing as a season for dog breeding?

If you are curious to learn if there is such a thing as seasonal months for dog breeding, then the answer is no. Due to domestication, there is no specific time of the year when all female dogs go into an estrus cycle.

To briefly explain the history of dog domestication- it is estimated that domestication began 15,000 years ago, when dogs parted with gray wolves and relocated to human settlements. Grey wolves are strictly monogamous and will only go into heat at winter time, so the puppies will be born at springtime. But due to domestication and less exposure to harsh weather conditions, their breeding cycle changed. Plus, domesticated dogs are no longer monogamous and can ‘make out’ with any male dogs around.

On average, grey wolves mature when they’re around 22 months old, while domesticated dogs will be sexually mature as early as 6 months old. In addition, male grey wolves only mate with one female, unlike male domesticated dogs, which are more promiscuous in nature. Thus, there is no such thing as seasonal dog breeding; your pet may go into heat at any time of the year.

However, there is an exception to the rule. The Basenji dog breed will only go into the estrus cycle at fall season. Puppies are born during the months of December or January. The same is true for the Tibetan Mastiff breed. The New Guinea Singing Dogs breed between the months of August and December.

5) What you can do about your female dog’s behavior while in heat?

I know that at times, it can be overwhelming to take care of a dog that is in heat. This is especially true if you do not wish to breed your dog. Additionally, you can get stressed with bloody discharge on the floor and on your beddings. Carpeted flooring can become stained with blood, and I know how challenging it is to remove those stains. Here are some tips on what you can do during the breeding season of your female dog:

6) Is there such a thing as doggie menopause?

Your female dog will go through the estrus cycle all her life. The only difference is that the interval between one cycle and the next will get much longer. In short, your bitch will never experience the menopausal period.

To sum up, dogs do have periods which normally begin at the age of six months. For larger breeds, they begin at a much later time, around ten months of age. The estrus cycle is experienced by most dogs twice a year.

From the time a bloody discharge is noticeable, the cycle may last for  seven to ten days. And from then on, bloody discharge will turn clearer, and the female dog will get into heat and become very receptive to male dogs. Male dogs will sense that your female pet is in heat because of the pheromones that she releases during this phase.

During the heat cycle, anxiety sets in, which is why it is best to give more love and affection to your dog. Make sure to create a comfortable environment for your female pet and don’t forget that the period is normal in her life, too.