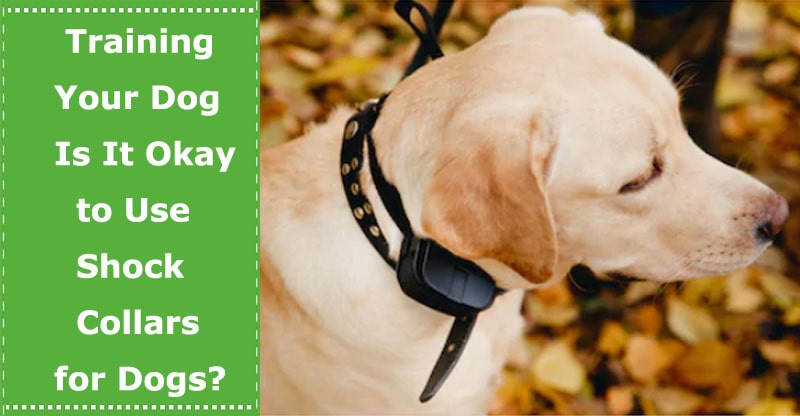 Home
Training
Training Your Dog: Is It Okay to Use Shock Collars for Dogs?

My dog loves barking at strangers. She is very territorial, so whether it is a person, a cat, or another dog, she will bark nonstop until the stranger goes away. Since her barking can be quite noisy and annoying, I’ve looked around for ways to train her to stop barking. During my research, I came across a very controversial gadget for training; shock collars for dogs. I was so intrigued by the debates over this training tool that I did some research. Here is what I learned:

What are shock collars for dogs?

Shock collars for dogs are training gadgets usually put around the neck of a dog that generally deliver a burst of electric current through two metal nodes attached on the collar and that make contact with the dog’s skin. The collar “shocks” a dog so that she or he will obey a certain command or stop a certain behavior. These gadgets are also called e-collar, Ecollar, remote training collar, Zap collar, and electronic collar.

Shock collars have been around since the 1960s. But the early versions only had these settings: high voltage and very high voltage. Thus, a stigma has been attached to shock collars because these have been traditionally deemed “inhumane.” Oh my gosh, the dog isn’t breathing!

Modern shock collars, however, now have features that allow owners to choose from 400 to 6,000 volts of electricity. There are also shock collars that play a beeping sound or vibrate or spray a smelly liquid or a blast of air instead of jolting a dog.

The collars can be placed not just around a dog’s neck but anywhere on the body. Other collars have a GPS function to help you locate your dog.

How does a shock collar work?

Shock collars are generally classified into three types based on their purpose: containment/boundaries, remote and anti-bark.

For instance, if you want to train your dog to remain in a certain region, the yard, you may want this type. It requires underground electrical wires around the training area from which you don’t want your dog to escape, a tracking device, and a collar. The surveillance system is going to monitor the place of your dog. If your dog gets close to the electrical wires danger zone, a signal will be transmitted by the monitor and a beeping sound will be played from the collar of the dog. If your dog continues to approach the hazard zone, a signal will be transmitted from the monitor and a jolt will be delivered from your dog’s collar. The jolt should prevent and switch back your dog from going.

dog to stay within the boundary you have set or train your dog not to jump over fences onto the streets.

This is the general-purpose type of shock collars. You will have a remote to fully control how intense the jolt to your dog will be when the jolt happens. This can be used for dogs who have aggressive personalities or who love to jump on people or who like to escape from the leash.

This type is activated by the vibration of your dog’s vocal chords. Depending on the model, it plays a noise, sprays a liquid, blasts air, or delivers a shock every time your dog barks.

What are the pros and cons of using a shock collar for training dogs?

Pros of shock collars for dogs

1. Intensity can be adjusted and controlled

As stated earlier, the intensity and frequency of the jolts can be adjusted and controlled. So, you can make the jolts intense during the initial phase of the training, and use vibrate mode in the last phase when your dog has learned her or his lesson.

Some pro-shock collar owners have given reviews on shock collars; the gadget delivers fast results. Dogs do not like being electrocuted despite the low voltage. So, in theory, the dog will quickly associate the jolt with unwanted behavior and stop doing it. Some successfully trained dogs are without the electric jolt, but with just the beeping noise.

3. Training can be done without the owner’s presence

You do not need to be present for a containment/boundary collar or an anti-bark collar since it works automatically based on your dog’s behavior. However, it is not advisable to leave your dog alone for long periods, especially with an electric gadget on the dog’s body.

Hiring a professional dog trainer can be expensive. The current average trainer fee is $11 per hour. If your dog is very stubborn, then you could be paying quite a lot for your dog’s training. A shock collar, on the other hand, can be as cheap as $25. It can become more expensive based on the features you want, but the total will still be cheaper than the regular fee of a dog trainer.

Cons of shock collars for dogs

Many owners would rather hire a trainer than inflict pain on their beloved dogs, however small or low the voltage might be.

2. Dogs might associate the jolt with a different thing

Although the duration of the jolts can be adjusted, the electric shocks are still brief, so some stubborn dogs might ignore the zaps or learn to time their bad behavior in between the zaps.

You may not even know how to properly use a shock collar with a user manual. You may end up giving a more intense jolt to your dog than you think you do. An anti-bark collar may zapp your dog too often without you realizing it, or the gadget may dysfunction for several seconds and zap your dog continuously before you can turn it off. If your dog is aggressive, it may worsen the aggression and your dog may attack individuals. Go close the fence of your yard, for instance, because of the collar, your timid or fearful dog might become more nervous.

4. Dogs will not get positive reinforcement

Shock collars target negative behavior through aversive methods. In dog training, an aversive is a tool that your dog will not like, which is used to correct or lessen an unwanted behavior. So giving verbal rewards or treats will become counterproductive because your dog is supposed to avoid the behavior and have an unpleasant reaction for the training to be considered successful.

What are the reviews on shock collars for dogs?

Dog owners who use shock collars believe that these gadgets do not inflict pain on their dogs. The jolt only grabs the attention of the dogs but do not harm them. For these owners, shock collars are not dangerous. Just like any other training tool, these are not used to punish their dogs but to train them to behave better. Further, some owners have pointed out that it is better for their dogs to be hit by a little electricity than to be hit by a truck because the dogs were not trained to stay inside the yard.

There are also those who considered shock collars as a last resort for very stubborn or violent dogs.

On the other hand, dog owners who oppose the use of shock collars believe that these gadgets are dangerous and inhumane. They argue that the jolt can be painful and is counterproductive to training because it causes dogs to be afraid or, worse, be more aggressive.

These owners prefer to use positive reinforcement, clicker training, prong and choke collars instead of aversive tools.

Although professional dog trainers require high fees, veterinarians are always there for me to consult. With so many differing opinions about shock collars, I think it is better to talk with my vet about the best way to train my dog. After all, as the owner, I only want what’s best for my dog.