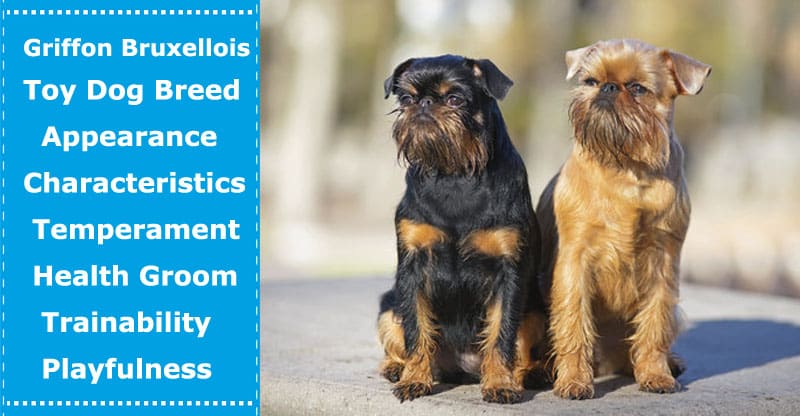 We’ve previously featured countless dog breeds, but nothing like this one-today we’re going to break down every aspect of this renowned dog breed, on-screen and off-screen. I’m talking about the Griffon Bruxellois, of course-a dog breed that has featured in many Hollywood movies. Take for an instance, the movie “As Good as It Gets (1997)”. This breed is basically unknown to the world before the film’s launch, but after the film’s premiere, it would be a big understatement to say everyone was after this kind of breed.

Let’s see if the star dog in the film still holds up as a pet today.

In this article, we will be talking about the history of the famous dog breed, its appearance, characteristics, traits, temperaments, health, and everything else that you need to know about this breed, so be sure to keep reading.

What is a Griffon Bruxellois?

The breed was usually popular in Belgium before its acquisition in Hollywood. The goofy-looking monkey-like facial structure of the breed is what captured the attention of the peoples right from the beginning. Its size and wit will also attract anyone who sees it instantly.

To put the Griffon Bruxellois’ overall personality in a nutshell, it’s like lukewarm water – not too hot, and not too cold either. However, some people might have varying opinions about it.

Why? Well, for starters:

For the most part, it can be a calm dog but remember always to give it want it wants when it wants it – such a diva.

Some pet owners with children like to introduce their kids to the Griffon Bruxellois slowly so that they don’t startle anyone and cause any unnecessary incident. Bringing this breed to other dog breeds in the house, particularly big ones, I would advise you to do the same.

Just like every dog breed, the Griffon Bruxellois has its ups and downs when it comes to their health (more on that later).

The Queen of Belgium by the name Marie Henriette took an interest in the Griffon Bruxellois breed around the same year in the 1800s, and took it upon herself to breed them. It wasn’t until the mid-1890s that this incredible breed was seen by the United States of America and the United Kingdom as it was exported to them only around that year.

The Griffon Bruxellois is classified as a toy breed, meaning it’s short, small, and sturdy inbuilt.

Relative to the body of the Griffon Bruxellois, their head is rather big. This breed looks like a goofy, comic, and serious dog wrapped in one with a face structure that looks strongly comparable to a monkey. A Griffon Bruxellois has a short neck, a compact look, straight posture, puffed chest, tucked stomach, high tail and sound limb positions.

A Griffon Bruxellois generally has 3 hair colors, namely: Black and tan, plain black, and red. These dog breeds are usually 7 to 9 inches tall and have an average weight of 9 lb.

Griffon Bruxellois dogs are very caring. They can effortlessly cling to their masters, and go with their master anywhere they go. Like other animals, this breed enjoys being petted as well. They’re going to let you carry them, placed them on your lap, even chase them. However, only when you two are alone can these features be noticeable. When there is someone around? It’s going to be a whole new story.

You might put your Griffon Bruxellois dog into his bedroom and invite your friends over, then introduce your friends gradually. Then don’t let him out yet, after that, let him first listen through the gate. Let him get used to the noise and to the fact that many people are interacting and moving in your house.

This dog breed is also a prevalent victim of separation anxiety. Leave for 5 minutes, and your Griffon Bruxellois will lose it! If it’s not disciplined at an early age, it could pose a problem when it becomes an adult.

Some breeds are more disease-prone than other dogs. Sometimes, rare diseases can occur only in certain breeds of dogs. Although the Griffon Bruxellois has no peculiar disease, it is never secure from other illnesses of dogs either.

Here are some of the health complications that you might have with your Griffon Bruxellois:

If your Griffon Bruxellois has:

Many individuals regard this as an important factor when they decide which dog breed to choose from. The most common issues concerning this aspect of dog selection are “Can I train it,” “Is it simple to train,” “Does it hear instructions” and “Can it comprehend instructions.”

So, can the Griffon Bruxellois be trained? In a nutshell, yes!

Sure, they can be hard-headed and easily distracted, but when they get to know you and build that connection, it’s going to be very easy for the Bruxellois to trust and do what you want. The Griffon Bruxellois can listen as long as he considers you as a master and as long as he can trust you.

Some people think that this dog breed is slow, but in fact it’s time and effort to be a trustful master for your dog that requires time. After you do that it is a walk in the park.

Pro tip: if you can teach your dog a command to stop barking, that would be incredibly useful for you, your visitors, and even your neighbors.

Like any other toy breed, the Griffon Bruxellois also like to have fun and play games. Again, once you build that connection and trust with your dog, he’s going to be demanding, asking for a lot of walks, plays, treats, and more. Other pet-owners love this trait in dogs, while some don’t. I’m just going to leave it up to you.

What is the lifespan of a Griffon Bruxellois?

Is there insurance for this dog breed?

Absolutely. In reality, the Griffon Bruxellois from the movie I told you about earlier is insured – As Good as It Gets. Just contact your preferred insurance company and enquire about their policies.

Is the Griffon Bruxellois aggressive?

Not if you train them not to be. As I said previously, connection with people or groups of people, of this breed isn’t very good. While Griffon Bruxellois is very susceptible to many people, there is a way to get this dog breed into a crowd or a group of individuals- slowly. You must be patient when teaching your dog to relate well with other people.

Are they good around kids?

Unless you shock the Brussels Griffon by presenting your children together and having all of them touch or pet the Griffon Bruxellois at the same time. Do it one at a time, slowly. The Griffon Bruxellois will eventually learn that the children are part of the family and should be protected rather than harmed.

It might take some work compared to other dogs, but if you train and help your Griffon Bruxellois grow the right way, then the reward will be tenfold your efforts.