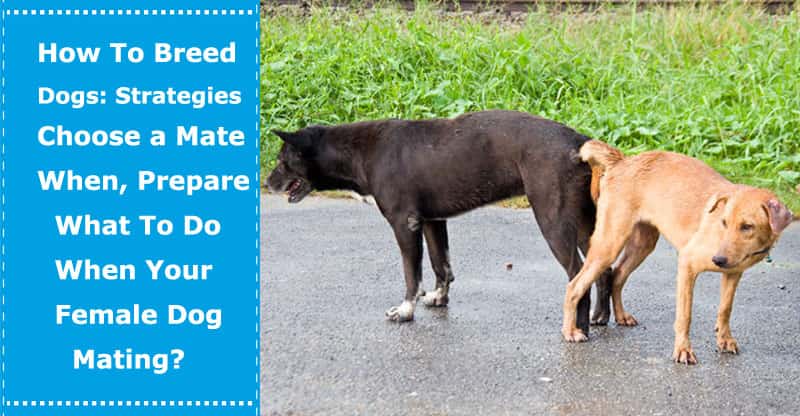 Home
Other
How To Breed Dogs: Strategies, Choose a Mate, When, Prepare & What To Do When Your Female Dog Mating?

So you want to mate your dog and breed little puppies?

Wait. Before you step in the towards breeding your dog, make sure you can give the puppies a nice home. As mentioned in a past article, many dogs are put through mercy killing in animal shelters. This does not include dogs that irresponsible owners throw away or murdered outright.

If you are sure that you will be able to take care of the puppies until they are adult and senior dogs, then read on for some tips on how to breed and mate dogs.

What do you need to know about breeding?

Even if you have a purebred dog, getting your female dog to breed can be a gamble.

You might have to shell out quite a lot of money for the following:

Your female dog might not have the physical capability to breed multiple times.

Remember, responsible breeding is all about making the breed better with less genetic diseases and better physical capabilities.

So, before you start breeding her, you should have a plan. Some of the questions you need to answer are:

Try to do some research when you have a clear concept of your answers. Look around your area and see which specialist breeder has the potential for your dog’s perfect mate. Ask competent breeders about their dogs ‘ physical and biological aspects. Read articles, books, and online sites on canine genetics basics.

What are the strategies for breeding?

There are several strategies that professional breeders use when they breed their dogs:

How do you choose a mate for your dog?

Now that you have more knowledge about dogs, their genetics, and the humans who handle them, it’s time to choose a perfect mate for your dog.

Base your choice on the characteristics you want the puppies to have. Dog breeders with good reputations will have pedigree certificates based on years of research for their dogs.

A dog’s pedigree covers not just the dog’s current health and physical status. It covers an analysis of the dog’s ancestors and their characteristics. Aside from the health status, a pedigree chart includes:

Study the history of the possible mate up to ten generations when you’re searching for a mate. Don’t just look at one or two generations. In this manner, you will be able to discover flaws that could suddenly occur in future generations. You can also find patterns for the features you want. For instance, if you want to breed a fast runner dog, the ancestor could show such a character through several generations.

When do you start to mate your dog with another dog?

Professional breeders do not allow their female dogs to mate during their first 2 to 3 heats. This is because of health reasons. Dogs have to be physically mature when they do mate. Some defects, like hip dysplasia become apparent only when a dog is physically mature.

How do you tell if your dog is ready to mate?

The next stage is called the estrus stage. It starts at about day 11 from the first day the female dog has a bloody discharge. This stage lasts for 9 to 11 days.

The female will allow herself to be mounted by the male during this stage. She will whine and flirt with other dogs. When you pet her, she’ll push up her rear and push her tail to the side. She will want to roam to other dogs. Her discharge turns from red to pinkish.

This is the most crucial stage for mating because the female dog will release eggs from her ovaries.

How do you prepare your dog to mate?

Bring your dog to the veterinarian for a general health examination, a blood test for possible genetic diseases, an x-ray of the hips of a female dog, heat history if your dog is a female. Before your dog becomes pregnant, the dog will also be given medication such as deworming.

Finally, the vet will need to certify that your dog is capable of breeding.

Let your vet do a vaginal smear test or serum progesterone test when your dog receives her next heat. These tests can predict when the ovulation of your dog will peak, which is the best time to allow your dog mate.

What do you do during mating?

You can have two ways of inseminating a female dog: you can use artificial insemination or you can have a male dog mount her.

A vet should do the artificial insemination.

If a male dog mounts the female dog, the sperm will remain active inside her for 5 to 7 days. So, as soon as the female allows the male to be close to her, you can start letting the female and male mate. Then let them mate every 2 to 3 days until the female does not want to be mounted anymore.

In this way, the sperm will be healthy before and even after the eggs are released from the ovaries.

If the male dog has effectively penetrated the female dog, the bulbous glands of the male will swell. The male swings a leg so that he and the female are “bound” together tail to tail. This is known as coitus. The two dogs will not be able to separate for 2 to 30 minutes.

This is normal, so don’t try to separate them. Keep monitoring them to make sure that the female dog will not roll around. She might damage the male dog’s penis if she does it.

What do you do if your female dog does not want to mate?

The following are reasons why your female dog might not want to mate:

If it’s the first reason, she might not be in the estrus stage yet. Try again in a day or two.

If it is the second reason, an experienced breeder will be needed to assist you with your female dog. Do not force your dog if there is no breeder because it could be risky for you and the two dogs. The female dog may become dangerously aggressive.

What do you do after mating?

You’ll also need to maintain your female dog surveillance. She will remain flirty until the stage of the estrus ends. So you have to keep an eye on her because she could be mounted again by another male dog. If this occurs, an accidental mating may lead in a litter with two different parents.

The female dog smells different from her normal smell after mating. Her fur will be wet from the male dog’s wooing. She will lick her genitals. She’s going to have a strange gait too. She will distance herself from the dog she just mated with.

A male dog’s penis will still be erect after mating. He will roll around the ground.

Both dogs will want to rest for a while after mating.

Let the official dogs mate again in 2-3 days. Some breeders keep the female dogs but you can bring your pet home if you want to.

How do you know if the mating is successful?

The diestrus stage, which comes right after the estrus stage of a female dog’s heat cycle, lasts for 58 to 63 days.

If the mating is not successful, her body will go back to normal.

If your female dog has successfully matted, she will become pregnant at this stage. Congratulations! In about 63 days you’re about to be a grandparent to puppies. Now time to prepare for the litter of your dog.