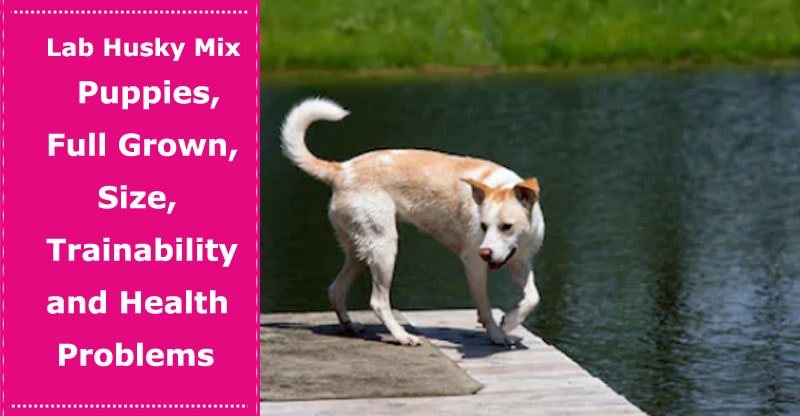 Taking care of a mixed dog breed could mean twice the trouble but at the same time, twice the enjoyment. And this is the exact way to describe the best of two dog breeds rolled into one which is the Lab Husky Mix.

It is known by its number of names- a Labsky, a Siberian Retriever or a Huskador.

Although this can be classified as one of the new kids on the block, there is a growing number of dog lovers looking to own this mixed dog breed due to its immense popularity in terms of temperament.

In this article, I will help you understand how this mixed dog breed can be an awesome addition to your family.

The Parents of A Lab Husky Mix:

This purebred dog breed has its origins from Newfoundland. It was used as a working dog whose job was to retrieve ducks and fish. This is the reason why this dog breed loves the water.

It is known to be smart, loyal, and has a friendly disposition.

This breed of purebred dogs comes from Siberia. It is also used to pull sleds on an icy surface. This dog helped transport goods like food, woods to be used to set up a fire, and other necessities.

It is known to be intelligent, good with children and a loyal companion.

In most cases, owning a mixed or designer breed of dogs is a gamble. It is because you don’t know the temperament of which parent it will have. But in the case of the Lab Husky, you definitely know what you are getting into. This is because the two purebred parents have similar features including high intelligence, integrity, dynamism, and friendliness.

Being a large breed mixed dog, the Lab Husky could develop slower than the smaller dog breeds such as Maltese. Therefore, it is very important to give your puppy a food formula that is made specifically for a one-year cycle of large breed puppy. It ensures that the puppy has the right food to maintain his strength, but at the same time does not allow the puppy to grow faster and endanger the health of his bones and joints.

As a pup, it’s not uncommon to see a Lab Husky litter bearing the same looks. But as each pup grows older, subtle changes will be seen. Little by little, each pup will bear a resemblance to either of its parents. Some might look more like a Labrador Retriever, while others might look more like a Siberian Husky. There would be some dogs that could have both parents mixed together.

The color of the coat, for instance, can be black, brown, red, white or a mix of those colors. The texture of the hair might be short or medium in length. The color of the eyes also varies, some pups may have blue or brown eyes, or in some cases, one of each color. This condition is called heterochromia (a condition in which the eyes are not of the same color).

Since not all Lab Husky mix full grown looks this same, there is a common denominator among them and that is the height and the weight.

Its height can be 20 to 25 inches tall and could weigh between 40 and 60 pounds. Here is a comparison between the two sexes:

Weight:  Females between 40 and 55 pounds

Males between 40 and 60 pounds

Males between 21 and 25 inches

The temperament of the dog is another area in which it can not be predicted accurately. That is because the dog may be more like one of the parents. But I’m going to put the temperament of a Lab Husky Mix Dog Breed on the list below:

But, the Lab Husky, when fully grown, may have a temperament of its own which is not listed above.

Expect that this dog is full of energy. Both of her parents are working dogs and thus boredom could be an issue if you don’t give her the required exercise. When bored, it’d find ways to stay busy and you wouldn’t want that to happen for sure. Thus, be sure to exercise it before you go to work. If you need to wake up early, do so. To keep it satisfied it requires an hour of hard exercise.

You can take it out on a walk, jog, run, hike or swim. The Lab Husky Mix is characterized by its webbed paws which are perfect for swimming.

It can be a problem to live in an apartment without a fenced backyard. But don’t get disheartened, it would be fine for as long as you take it out for some physical activity.

There may be days when you cannot take it out due to some circumstances, what you can do is to provide it with indoor games such as fetch games such as Chuckit! Canine Hardware Indoor Roller Dog Toy or Chew King Durable Natural Rubber Fetch Toy.

That being said, for someone living a sedentary lifestyle, the Lab Husky Mix is not a good match. It’s just not longing for a workout, but it’s waiting for a kind of vigorous exercise.

The Trainability of a Lab Husky Mix:

This dog is a descendant of two smart dogs, so expect to be easy to train. Some dogs may be eager to make their fur parents happy, so it’s going to make easy learning. Or perhaps the dog may inherit a Siberian Husky’s stubborn personality, if that’s the case, training can be quite a challenge.

The important thing for you, however, is to establish yourself as the pack’s leader. This has to be ‘ relayed ‘ from day one to your dog. Siberian Huskies are pack animals and they love to follow their leader.

The best way to train your Lab Husky is by using positive reinforcement, either through words, gesture or food treats like Crazy Dog Train-Me! Training Treats.

Besides training, socializing your Lab Husky Mix dog is also important. It shouldn’t be difficult because this dog is friendly towards other animals and new people.

Also, exposing your dog to different sounds, sights, and even smells at a young age is a good idea. This is what is called desensitization — a process in which you are teaching your dog how to stay calm in different unfamiliar scenarios.

Few Behavioral Problems That You May Encounter:

Both of its parents have some behavioral problems which may be passed on to their offspring. But if you will train your pup at a young age, these can be altered.

For example, since a Labrador Retriever enjoys chewing on things, the Lab Husky Mix may inherit such traits. What you can do is buy indestructible chew toys for aggressive chewers like EETOYS Dog Chew Toys.

A Siberian Husky also enjoys digging that can be passed on to her offspring. What you can do is pick a corner, fill it with soil or sand, and then train your dog just to dig in that area only.

This dog is double-coated which consists of a soft undercoat and a long overcoat. The double coat has a function as it protects the dogs from harsh winter months.

This dog is shedding heavily. Shedding seasons are spring and fall time. Regular brushing can help control the shedding during these times of the year by using an undercoat rake such as FURminator Grooming Rake. Compared to the FURminator deShedding Ultra Premium Dog Shampoo, it is also recommended to reduce shedding.

The lifespan is 11 to 13 years but it can be cut short due to different health problems such as:

A dog suffering from this disease has a recessive gene that makes it vulnerable after a prolonged exercise regimen to loss of muscle function.

There are certain types of proteins that your Lab Husky may be allergic to. Signs are redness of skin and scratching.

This is an inheritance that is most common in large breed dogs. A dog suffering from this painful condition has underdeveloped joint sockets.

The sign is drying of the eyes. The corneas are affected due to a lack of moisture.

Other types of health problems that could plague your dog are:

While your Lab Husky is still a puppy, feed it 1.5 cups of puppy food for large-breed dogs per day, divided into three servings. You can cut it down into two portions once they reach the age of six months, with a total of 2.5 cups per day.

Twice the Trouble, Twice the Excitement:

The Lab Husky Mixed dog is an expensive dog breed in comparison to other types of mixed dog breeds, but it is worth the money spent on.

The mixed breed of dogs is lovable and intelligent, making it a great addition to the family. With both parents ‘ working-dog lineage, it’s no doubt you won’t find it hard to it teach how to obey you once you’ve established yourself as the alpha.

But be prepared for an active lifestyle as it requires more than just a short walk to the park. Every day, it wants an activity packed with action for an hour.