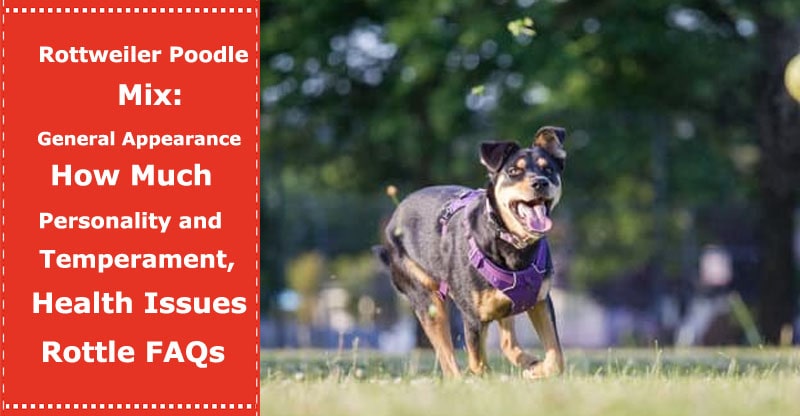 Poodle mixes are very popular these days, so it’s no longer surprising when you hear of designer dogs like the goldendoodle and the labradoodle. These medium to large-sized dogs are really cuddly, adorable, and friendly despite their size.

But there’s another big poodle mix that can rival the doodles’ cuteness — the rottweiler-poodle mix, or more commonly known as the rottle.

Although the rottle is not recognized as other poodle mixes at the moment, it is probably one of the best crossbreeds out there. This attracts dog lovers who are into dogs that look like stuffed toys with a sturdy body and a fuzzy coat. Who knows, if more people realize how adorable they are, the demand for rottle pups can eventually rise!

After all, according to AKC’s 2018 rankings, her parents are among the most popular dog breeds, with the poodle at 7th and the rottweiler only trailing at 8th. No wonder breeders thought these two would be a great mix literally!

Brief History of the Rottweiler-Poodle Mix

The rottle, rottie-poo, or rottiedoodle is a crossbreed that is made by breeding a purebred rottweiler with a purebred standard-sized poodle. As the offspring of two affectionate purebreds, rottles make great companion dogs.

The earliest known appearance of rottles was in the 1980s, though little is known about why these model dogs were first produced. There is believed that both the rottweiler and the poodle originated in modern-day Germany. Historical accounts, however, say they’ve been around for longer than we thought.

Historically, the poodle was bred for retrieving ducks and waterfowl, while the rottweiler has been a multi-purpose working dog since the time of the Roman Empire. The poodle’s curly coat makes it a great water retriever, while the rottweiler’s stocky build had been helpful in herding livestock.

Theses days, rottweilers enjoy their present jobs as police dogs and service dogs. As for poodles, although often thought of living in quiet and comfortable lives because of how they are portrayed in the media, they remain faithful companions to their families. Of course, many of them are still bred for their primary purpose.

Perhaps the original intention for the rottle was to create an intelligent, heavy-duty hybrid that also has a hypoallergenic coat. No matter what the case may be, the rottle is a friendly pooch that is solid, athletic, and well-built.

The rottle can have a wide variety of possible looks just like most crossbreeds. One aspect that seems unique among them is that they seem to inherit the length and texture of the fur of the poodle. Their rottweiler lineage can mostly be seen in the shape and look of the head, as they appear to be softer compared to the narrow and pointed nose of the poodle.

Because the rottweiler and the puddle belong to similar size ranges, rottles can be assumed to be about the same size. It may end up being visually the size of a small standard poodle (15 to 24 in. up to 50 lbs.) or the size of a big rottweiler (24 to 27 in. up to 110 lbs.). Therefore, this hybrid can be a great pet for you if you like medium to large dogs.

The rottle has a thick coat which is usually ranges from wavy to curly. The length varies from medium to long While the usual rottle puppies come in black with tan markings like the parent rottweiler, it is also possible to inherit the coat colors of the poodle. The puppies can, therefore, be white cream red, brown, gray, white, blue, or pied.

How Much are Rottlweiler-Poodle Mix Puppies?

Rottle puppies can easily be worth at least $2,300. They may even be sold for as high as $3,000. Since both the parents are pretty expensive individually, expect rottles to be priced the same.

Fortunately, you may be able to land a good deal if you find a breeder that has produced large litters. Because it’s difficult to take care of many puppies, they may offer their rottles for a cheaper price to interested buyers.

Rottles are playful, carefree pooches that have succeeded in inheriting their parents ‘ best traits. We are among the finest canine companions you can ask for, smart, fun-loving, sweet, and even-tempered. Loyal, dedicated and extremely protective of their families, rottles make great watchdogs with their loud barks that can scare off possible intruders.

Notwithstanding their initially imposing stance, they will finally warm up to you once they feel that you ‘re not a threat. In addition, they can lunge at you because of their innocence and behave as a lapdog even though they are too big for that. So, if you’re looking for a friendly, cuddly pet that you can carry on adventures with you, the rottle is certainly a treat.

Since the rottle’s parents are both smart and eager to please their humans, you won’t have trouble training them. As puppies, they will be able to pick up simple commands and obedience training pretty quickly.

However, they may be a bit stubborn and hyperactive to the point of refusing to listen because of their high energy levels. Therefore, in explaining to your pooch that you are the pack leader, you will need to take a firm stance. It means that he can respond accordingly to your commands.

To manage their hunter instincts, early socialization is recommended for rottles. Sometimes, being curious about other animals can not be helped, so exposing them to as many stimuli as possible is best. This will not only satisfy their curiosity but also ensure that other animals and even people who are not expected to be predators will not be harmed.

Other than their occasional stubbornness, rottles are generally pretty easy to housetrain. That said, if you are a first-time pet owner who’s looking for an obedient, loyal, medium-sized dog, you may find the rottle a good fit for you.

Although the rottle is usually quiet and collected, allowing this dog enough space to play is recommended. Since rottweilers and poodles in their own way are both strong and athletic, the rottle will obviously inherit much of its strength and energy. They will also be happy to play games at your backyard for retrieval.

If you prefer a pet that’s going to enable your laziness and couch potato sessions, you better look elsewhere. The rottle is not for the lazy, physically unfit owner. In fact, the rottle needs approximately 60 to 90 minutes of exercise daily.

They especially need to get these minutes in because they are prone to weight gain when not they are not exercised enough. Of course, due to life schedules, it might be impossible to get the required exercise all at once. You may have to divide your dog walks into two sessions per day, at half an hour each.

Nevertheless, weight gain is not the only consequence of not getting enough exercise. Because walking and playing time are a form of mental stimulation for them, they may also get bored. We all know that boredom in dogs can lead to destructive conduct, such as excessive barking, biting and chewing. They might even be aggressive towards others.

Swimming is an activity that many rottles seem to be drawn to. Their love for water can probably be traced back to their poodle roots. If you are into the great outdoors, taking your rottle can make your trip really fun for both of you.

A well-trained and healthy dog must be well-fed, of course. Generally, they require 3.5 cups of high-quality dry kibble per day, which can be divided into 2 or 3 meals. Because poodles are quite susceptible to digestive problems, it is recommended that you only get a highly nutritious, low-filler dog food.

Poodles are known to sport a high-maintenance coat. Though rottles’ coats are less curly than the poodle’s, it still needs consistent care. It’s recommended to brush their hair daily using a comb and a pin brush.

To maintain their coat, you may need to take them to the groomer every 6 to 8 weeks. If you want a long-haired rottle, make sure that you comb your pooch’s hair every day to avoid tangles and matting.

If you’re planning to get a rottle, make sure you have the time every day to take your pooch out for a walk and brush his coat. In fact, be prepared to spend a substantial amount of dog food, since after spending all of its energy, your pooch is likely to munch on a lot

For a large breed, the rottle has quite a long lifespan compared to purebreds of similar sizes. Unfortunately, they may also inherit the most common health issues of their parents, which are:

Since most of these diseases cannot be detected in puppies, make sure that you get your rottle pup from a breeder that thoroughly checks the health of their parent dogs.

Are Rottles a Good Match for Families?

Since they easily bond with their owners, Rottles make an excellent family. They tend to be cautious of strangers before they warm up, they also make great guard dogs.

They are typically good-natured and protective of children. However, rottles may act aggressively towards small children who attempt to play with them roughly.

To prevent such aggression from happening, make sure that no one leaves a small child and a rottle alone. Even a socialized rottle may snap at a child that treats it as a toy.

Are Rottles Good for Apartments?

Since the rottle is a very active dog, it’s better to live in houses with a healthy backyard. These dogs need a big space to channel all their pent-up energies. While they typically do well on their own, apartments may be too small for them to have fun while you’re gone.

If you’re looking for a poodle mix that’s good for apartments, you’re better off choosing smaller dogs like the maltipoo, Yorkipoo, cockapoo, or toy goldendoodle.

Are Rottles Good with Other Pets?

Rottles will likely inherit their poodle parent’s hunter instinct so they will tend to chase down other animals, especially the smaller ones. Therefore, socializing them as soon as possible is important in order to make them feel comfortable in the presence of other pets.

Taking them to the dog park would be a good idea once your rottle learns to walk on a leash. This would expose them to other humans, dogs, and many other stimuli.

While the rottweiler is a seasonal shedder, the poodle is a very minimal shedder. Overall, this breed is a low-shedding pooch, which during the shedding season may need extra grooming care. During this time, brushing their coat twice a day should help.

If you have canine allergies, you may have to stay away from the rottle and choose another pet instead.

The rottle can be a great choice if you’re looking for a medium to large-sized poodle mix. They are loyal, affectionate, cute, and cuddly — plus, they also have the skills of a trusty guard dog.

It’s also a companion you can take with you on endless adventures — from simple day-to-day walks around town, mountain hikes, swimming in rivers and lakes. If you’re ready to take care of a high-energy, high-maintenance dog, then you’re prepared to become a parent of the rottle.