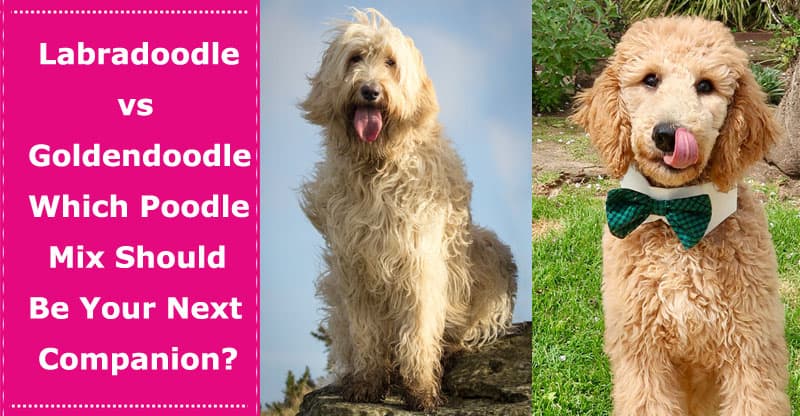 Home
Buy
Labradoodle vs Goldendoodle – Which Poodle Mix Should Be Your Next Companion?

The popular question of someone searching for a designer breed dog is “how to choose a poodle mix dog” and how to differentiate one from the other. Comprehensibly, choosing as these dogs look like each other can be quite difficult. And if you happen to be interested in picking between a Labradoodle or a Goldendoodle, I’ll help you figure out the differences between the two breeds of designer dogs so that you can asses which should be your next canine companion.

What is a designer breed dog?

On the other hand, such is not the case with a designer dog such as Labradoodles and Goldendoodles. This is because it is a mix of two purebred dogs with different personalities. You may get a pup which is more like a poodle or the other way around.

What is a Labradoodle?

A cross between a Labrador Retriever and a Poodle, this designer dog breed was developed in Australia as a hypoallergenic guide dog. The outcome of crossing these two purebred dogs is a sweet, friendly, smart, and low-shedding Labradoodle guide dog.

What is a Goldendoodle?

A cross between a Golden Retriever and a Poodle, this designer dog breed is also bred to work as a guide dog. It first appeared in the US during the early ’90s, and it is known to be a hypoallergenic dog.

The comparison between the Labradoodle vs Goldendoodle two doodles

Choosing between the two doodles is quite normal, as both are undeniably adorable and cuddly. But I’m going to point out below the comparisons so that you can find out for yourself which doodle is right for you.

On the other hand, the coat of a Labradoodle is short and curly. The color of the coat is more varied as compared to a Goldendoodle. There’s pure black, yellow, cream, dual-colored and tri-colored as well.

Both doodles are hypoallergenic, making them ideal companions for those who suffer from asthma and other forms of allergies.

On the other hand, the Labradoodles are also loving, delightful to be with, and full of energy.

This designer dog breed also seeks a human companion, and thus, separation anxiety could be an issue to deal with.

6. Who eats more between the two doodles?

Not surprisingly, since both the Labradoodle and the Goldendoodle carry with them almost identical genes, then both have indistinguishable health issues such as:

Summary of the Labradoodle and Goldendoodle

So which of the two poodle mix designer dog breeds should you choose? It can be a hard choice to make, as both have nearly the same characteristics. Both races are intelligent and sociable. The only distinction is that when it comes to meeting fresh faces and circumstances, the Labradoodle is more of the reserved sort.

In addition, although they have the same physical exercise needs, the Labradoodle is a bit more energetic than the Goldendoodle. So if you are the athletic type of a person, then maybe the Labradoodle suits you better.

Both the doodles can happily and peacefully cohabit with other animals. They are good with young kids as well, thus, making them a great addition to the family.

Eventually, their hair color is the only thing that sets them apart from each other. The colors of the Labradoodles are more diverse than the Goldendoodles. But whatever you choose, I’m sure the whole family will love it will be an excellent and outstanding designer dog breed.