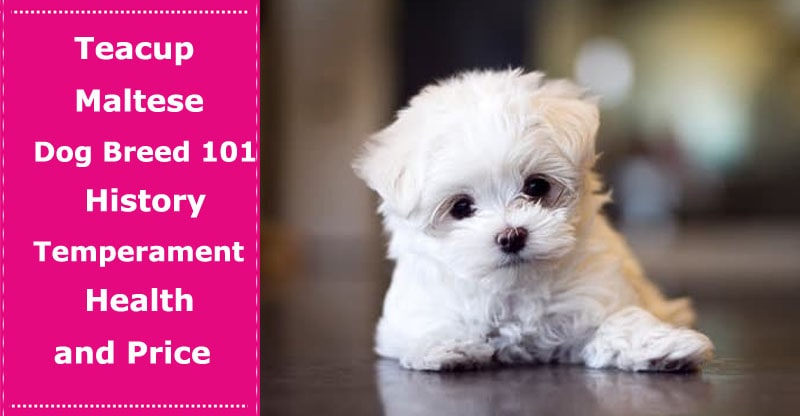 Ever thought about getting a Maltese dog for a pet, but you thought “if only this dog was smaller…”

Well, you’re in luck because we are going to take a crash course about a tiny Maltese dog – a Teacup Maltese!

Now we are going to talk about everything in this article that we need to understand about this small, gentle yet dauntless breed! We are going to cover everything from their history as a breed, their characteristics, how to take care of them, whether they’re good as pets or not. So be sure to stick to this friendly, energetic dog and open your minds to the Teacup Maltese.

History of the Teacup Maltese

The origin of the Teacup Maltese, despite its rather modern name, actually dates back to at least 2000 years! The Teacup Maltese is a prevalent breed even back in those times. In fact, it is so popular that it is part or mentioned by the artists and writers in those days in numerous songs, novels, and poems. In one of his works, Aristotle himself cited this breed. The Teacup Maltese is undoubtedly a breed to look at if you are interested in dogs that are rich in culture, as they were there to see Greece’s culture evolve. The Greeks even made tombs for their own Maltese dogs.

The number of registered Teacup Maltese and Maltese dogs in the United States grew in the 1950s. Since then, the Teacup Maltese has been known with the popular culture, and a lot of dog shows that show off a dog’s intelligence, agility, and more.

The Teacup Maltese is innately vibrant. They are very people-oriented, meaning they respond well and respect people. A people-oriented dog is a dog that is easy to train as they pay attention to what the person is trying to teach them. They will also exhibit positive feedback from rewards such as treats and praises.

Teacup Maltese dogs, just like Maltese dogs, are dauntless. They are more likely to show respect to a stranger, even befriend them, rather than aggressively bark at them. They are great with other animals, too. Basically, everything and everyone that passes the Teacup Maltese is a friend to them.

It is advisable to expose the Teacup Maltese to other dogs at a very early age. In fact, some pet owners register their Teacup Maltese for this very purpose; to teach their dog how to socialize. The socialization act enables your dog to adapt quickly to the changing environment. It will teach them to be calm and assertive in almost every situation.

Much like every other dog, the teacup Maltese dog temperament is relative to a few factors, namely: their training, genetics or heredity, and what I just mentioned, socialization.

The teacup temperament of Malta gets a rating of 4 out of 5 overall. A pretty high score for a relatively small dog. Most of the teacup Maltese dogs you will see are gentle, quiet, affectionate, caring, trusting, and intelligent. At times when there are many people or dogs around, they can get playful. They like playing a lot, that’s their workout style. They may become stubborn, extra hyper when deprived of their exercise, and they may even bite things they see.

As for the adaptability of a Teacup Maltese, they mostly go well with living in an apartment. They can be easily potty trained, which is particularly good for rookie owners who still don’t understand how to train properly. Teacup Maltese dogs dislike being along and subjected to locations that are too cold and too hot. Being with you in a room temperature room, some snacks and a bowl of water is all that your Teacup Maltese is looking for.

Teacup Maltese dogs will go well with the family. They are child-friendly, dog-friendly, neighbor-friendly, and even stranger-friendly in some instances. Because of their characteristics and, their size, having a Teacup Maltese dog as a guard dog is not a piece of good advice. I don’t think anyone would be intimidated by a small wild dog.

The Teacup Maltese is an incredibly brilliant breed when it comes to basic logic, critical thinking, and even reasoning. This is a dog breed that you can actually communicate to if you just know how to listen to what they are saying. They are quick to train and quick to understand.

As the name suggests, this dog breed is tiny, the tiniest Maltese dog breed, as a matter of fact. It is called the ‘Teacup’ version of a Maltese because it does look like it can sit inside a teacup.

They have an average-sized pair of ears relative to their head, big round black eyes, and a cute little black nose.

Teacup Maltese dogs are incredibly short and light, only being 8 to 10 inches tall and weighing only 7 pounds on average.

Maltese are generally classified as healthy dogs, but much like every other dog breed, some diseases are more prone to be caught by specific dogs than others. The “Mini Maltese” or the Teacup Maltese is no exception.

A Teacup Maltese’s lifespan is 12 to 15 years on average. So choosing to have a Teacup Maltese as a pet is a long term commitment, you have to be ready for that.

When choosing a dog as a pet, it is essential to know the puppy’s parents ‘ medical history and the probable illnesses they may have. You surely don’t want to get a puppy that will cost you a lot of money for its medical bills. You may claim that dog insurance will safeguard your money, but if you get a good dog, it’s better for everyone.

With that said, here are some of the diseases that a Teacup Maltese is likely to have:

Note that not all of Teacup Malteses are affected by these illnesses, this is only a list of prevalent illnesses for the said breed. If you suspect your dog has any of these illnesses, call or go to your vet immediately.

How does one take care of the silky, pure white, and straight hair of the Teacup Maltese? Let me tell you.

Unlike other dogs, there’s no undercoat in Teacup Maltese and  they don’t shed a lot, either. When a Teacup Maltese dog sheds, they won’t shed again for quite some time. Most people, particularly those people who are susceptible to dog fur but also like to own dogs, find this a very great thing. Also, like any other small dog breeds, tear stains can happen to teacup Malteses, which can be easily removed by rubbing it with water.

In case your dog develops mats, first attempt to detangle it gently with your hands. If that fails, a detangler spray, coat oil, or hair conditioner can be used. Comb that region regularly after you untangled the mat to make sure the hair is all separated from each other. Before you bathe your dog, make sure you remove all the mats first as removing the mats on a wet fur is considerably more hard.

Here are some other things that you need to remember:

The Teacup Maltese, in a nutshell, is basically a Mini Maltese. It’s packed with all of the Maltese goodness that we all know and love, without the large exterior that is rather difficult and heavy to have on our lap. If you’ve ever had that problem before, then the Teacup Maltese is the dog breed for you.

This dog breed is also packed from the Greeks, Asians, Italians, and even the Egyptians with 2000 years of ancient history. It’s difficult to say no to this dog breed with the classic and typical sweet, loving, gentle, and intelligent Maltese dog temperament. With Maltese dog prices ranging from about $800 to $3500, it’s no surprise that many people own this breed of dog. It offers a lot of versatility in terms of price, it’s not that complicated to take care of, it’s great for the family, and they are adorable.

So, would I recommend the Teacup Maltese to you? Absolutely! If you don’t have a lot of experience with dogs, you can easily take care of a Teacup Maltese, and you will get the full experience of what it’s like to be a well-rounded dog owner.