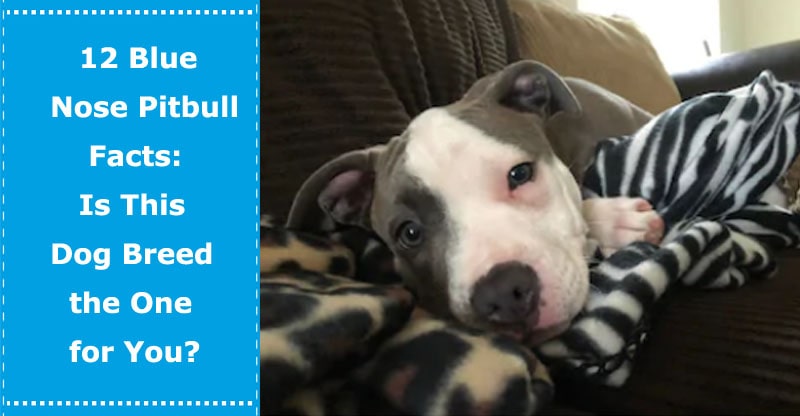 Home
Breeds
12 Blue Nose Pitbull Facts: Is This Dog Breed the One for You?

It’s not an easy task to find the right doggo, in fact, this choice will ultimately decide who will stand by your side to become your lifelong companion! Yet choosing is not something we can really afford to take lightly with so many different dog breeds out there. That’s why we decided to let you in on all the dog breeds we know. From the most compact doggies that can snuggle up and be carried everywhere, all to the most aggressive and loyal canine types that will defend you–you’ll see them all.

For today’s dog breed, we’ll look at the Blue Nose Pitbull, one of our current generation’s most well-respected and sophisticated dog breeds, well-known for their athleticism strength and overall appeal. Of the Blue Nose Pitbull, however, little is understood except for the tip of the iceberg, and only a small few are aware of how magnificent this dog can be! So, saddle in because we’re here to tell you about the top 12 Blue Nose Pitbull facts and find out if this dog is on for you!

What’s so Special About the Blue Nose Pitbull?

Actually, just about everything, from their emotional and sensitive being to their lively and athletic features, is hard to find a dog with this combination of personalities. You can call them the canine world’s machos with the way their bodies are built, but they can also be considered quite the cutie pies because this little blocky head can’t resist a good cuddle session. But now the question are, what separates the Blue Nose Pitbull from all the other dog breeds, what 12 facts should you know?

Above all, let’s think about the beautiful blue nose, which people just don’t seem to be getting enough. To get things started, we want to remove the misconception that the Blue Nose Pitbull is a different breed because the only distinction from this doggo between a typical bully is just their nose color. The explanation behind this adorable blue nose is due to the presence of a recessive gene, resulting in the coloring of the nose appearing light grey or named blue As far as uniqueness is concerned, the likelihood of getting a blue nose is quite unusual because it comes from a recessive gene, which means that both parents need to have the specific genome. However, it does come at a cost though, as these Pitbulls are more prone to behavioral and health problems.

Given how they look and how they are made, you would be surprised to find out how the Blue Nose Pitbull is really caring and mild-mannered. If only one thing would differentiate them from all other dog breeds, it would have to be how quickly they get attached to their owners and never want to leave their side again. This doggie will be in your face continually asking for a hug and snuggle up with you whenever they get the chance. Their main goal, though, is to satisfy you and see you happy, which means that when they see you get irritated by their actions, they know when to hold back.

Like any other Pitbull, the Blue Nose also carries its various energy packets, which end up being an endless supply of being busy and alert at all times. The Blue Nose Pitbull will always ready to unleash any of its pent-up energy, whether it’s at home or going for a walk in the park. And, if you’re looking for a very athletic dog to suit your active lifestyle, this might just be your perfect companion. You have been warned though, you might find yourself out of breath before this dog even gets started!

4. Big and Strong but Equally Intelligent

Brawns and brains have always been polar opposites regardless of where or what is spoken about, but as opposed to the strength and power of the Blue Nose Pitbull, they are equally as smart. We’d like to call them the ideal combination of brawns and brains because they’re competitive and athletic even from the get-go, but like other intelligent dogs, they also have good cognitive capacity and learning ability. That means you’re not going to have to worry about this bully being incompetent as they’re more than capable of learning intermediate tricks and commands if the chance is provided.

Yes, because of its sheer size and design, the Blue Nose Pitbull may look very intimidating, but it’s really one of the most sociable and friendly dogs you’ll ever meet. When it comes to strangers, they are very curious and inquisitive dogs willing to make friends whenever they can. Yeah, if you have friends coming over you’re not going to have to worry about this doggo sniffing around because he’s just trying to introduce himself and get to know the new people around him. The same also applies to other dogs, they may be indifferent and hesitant to begin with, but eventually, these doggies love to open up and make new friends.

Although we mentioned that the Blue Nose Pitbull is susceptible to behavioral problems and problems, on the other hand, their intellect makes it very easy to mitigate and even completely eliminate its effects through learning. Every bully is very easy to train, and it comes from their love for their owner as well as being quite the smarty-pants, making them the perfect candidate to be trained. From simple tricks to sitting, to the more nuanced orders. Nonetheless, make sure to reward them with tasty treats because this dog loves to receive feedback from its owner.

Another amazing fact about the Blue Nose Pitbull is that they’re quite the jumper, and by jumper we mean they can really “jump” remarkable heights that will leave you in awe. They can jump over 15-feet-high fences, and that’s because of their leg power and strength it helps them to unleash so much jumping power. Be aware though, this also goes for being in the living room because they won’t let up a chance to jump onto their favorite owner and slobber them in kisses!

We know all too well how difficult it can be to groom, particularly if you have a dog that sheds a lot or has a very bushy coat and long hair that needs to be kept 24/7. You may want to look into the Blue Nose Pitbull if you don’t want to pressure yourself or have the patience for that kind of grooming treatment. They are very easy to groom and are very simple for the most part when it comes to keeping them clean and free from any ticks and fleas. Their fur is short and silky, making it almost impossible to get caught in dirt or any debris. Nonetheless, skin problems may be a concern, but you’re all fine if you make it a habit to check up on them.

Another thing about the Blue Nose Pitbull is that it is one of the most sensitive dogs out there. Through their instincts and emotional intelligence, they can read any situation and will be there instinctively to console you when they sense any distress or even the slightest frown on your face. Although this may sound sweet, they have their mismanagement of emotions on the other side of the spectrum. When you happen to be the stern one who is not afraid to yell or punish, it can do the dog’s reverse. This bully is very likely to become nervous and terrified quickly and may result in a violent outburst.

If you’re looking for a family dog, you might have found one of the sweetest dogs yet, while many dogs are struggling to manage to be with children, the Blue Nose Pitbull is quite different. These are gentle giants who are very quiet and relaxed whenever they need to be, so they would know when to hold back when they’re around kids who can’t handle a rough play session. Not only that, their fun nature makes them a great kid’s play buddy –imagine how adorable it would look together in a picture

As mentioned earlier, the Blue Nose Pitbull has its specific needs and special care to be taken care of because they are more susceptible to certain behavioral and health issues. They may have common ailments among the following: allergies, mange,  mobility issues, neurological disorders, immune disorders, skin problems, and much more. It means they need a bit more love to get day by day and need a special person to take care of them if they don’t feel their best, do you think you’re up for it?

Last but not least, the Blue Nose Pitbull is one of the famous dog breeds out there, so many don’t know much of their beautiful features. In particular, Pitbulls have always had a bad reputation among the dog lover community, but not because they are bad dogs, but because of the past, that irresponsible dog owners have ut them through. They were bred for blood sports involving dogs fighting each other until one was seriously wounded or killed. Much of this history, however, has gone away for a long time and is not even intrinsic in the dog itself, which is a sad truth, as not so many see it.

Ultimately, the Blue Nose Pitbull is a wonderful dog, if you ever want to give him a chance, it will make a great friend and loving family member. They are well-built and powerful, active and athletic dogs, so much that if you both go on an early morning run, you might even be the first out of breath! Not only that, given their size, they are also very smart dogs and are able to learn various tricks and commands. Add to that, the Blue Nose Bully is also the most sensitive dog you’ll ever meet, one that’s really anxious to console when you’re upset but also nervous when reproved.

Despite all of these fascinating facts though, the Blue Nose Pitbull is misunderstood by may and is seen in the wrong light by most people. However, the truth still stands that this dog is good-natured and friendly by heart and in soul. So, if these traits excite you then you may have just found the perfect companion to adopt!

If you want to keep reading more about Pitbulls, you can also go check out our article on the Different Pitbull Colors, and find out which one suits your personality best!