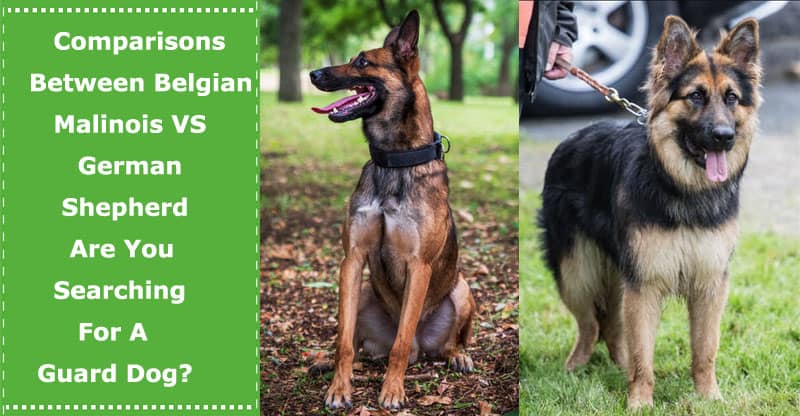 Home
Buy
Comparisons Between Belgian Malinois vs German Shepherd – Are You Searching For A Guard Dog?

Are you contemplating getting a new guard dog for your home but you cannot figure out whether to buy a Belgian Malinois or a German Shepherd? No worries, this article is all about the comparisons between these two astounding guard dogs.

First of all, both of these dogs are regarded as military dogs. This implies that both the Belgian Malinois and the German Shepherd are widely trained to help military men in military operations related to bombing, drug and weapons identification.  They’re also trained to attack the enemy, so they’re very good guard dogs.

Most of the time, the two dogs are mistaken as the same breed because they look alike in their physical appearances. However, the two dog breeds are not the same in terms of behavior and training. For instance, the Belgian Malinois is more aggressive and has a faster-attacking speed than the German Shepherd. In this article, It will deal mostly about the comparisons between Belgian Malinois vs German Shepherd. But let’s begin by talking a bit about each dog breed.

A Brief Description About Belgian Malinois:

This dog breed is intended initially as a herding dog in Belgium. The Belgian Malinois is renowned for their strong monitoring abilities and is therefore very helpful in police and military search and rescue activities. If you don’t have a dog care experience, then this dog breed isn’t great for you. You may not be able to keep up with its elevated rate of energy that could only make this dog unhappy and destructive.

A Brief Description About German Shepherd:

This dog is one of the most popular dogs around the globe. It works side-by-side with military and police personnel in various operations such as search and rescue, bomb-sniffing, to name a few. The German Shepherd is also trained to assist disabled people. The person who should be caring for it must love an active lifestyle because this dog is not the couch potato type.

The Belgian Malinois has a short, straight and fawn-colored coat. The coat is double-coated, with a hard topcoat and thick undercoat which serves as a protective layer for harsh weather conditions. One of the distinguishable marks is its black and triangular-shaped ears. This dog is a low shedder, making it great for allergy sufferers.

A Belgian Malinois can grow up to 24 to 26 inches and may weigh up to 65 pounds.

The German Shepherd, on the other hand, has straight and long hair. The texture is on the wiry side. The color of its coat comes in a variety of shades and patterns which include black, silver, sable, and red. Unlike the Belgian Malinois, this dog breed sheds heavily all year round.

It is slightly bigger than the Belgian Malinois, it can grow up to 24 to 26 inches but can weigh up to 75 to 90 pounds.

So in terms of its physical appearance, the Belgian Malinois is a bit smaller than the German Shepherd. And if you are concerned about shedding, then Belgian Malinois should be a better choice for you.

This is an excellent working dog which is wary of strangers. It is perfect as a guard dog as it is known to be very protective of its owners. Before getting a Belgian Malinois as a pet and protector of the family, let me mention that there is a controversy over its ownership. For three reasons, this dog breed is not a typical family dog:

Don’t get me wrong though, a Belgian Malinois can be a great addition to a family provided that there is a family member who is very capable of handling and training the aggressive tendencies of this dog.

Aloof, reserved, and intelligent are just some of the adjectives that greatly describe a German Shepherd. It is choosy when making friends, but once a friendship is established, it is one of the loyal dogs around. And, once you have built a connection with this dog, it can be a fun canine buddy to play with and can be your fierce protector, as well.

The German Shepherd is great with kids, unlike Belgian Malinois. It can live with children quietly and safely as long as it is trained and socialized at a young age. It has a more calm and patient attitude toward kids. In reality, it is known for protecting children from harm.

The only possible problem is the need for a human companion. It hates being alone for a long period. If ignored by family members, it can elicit annoying behaviors such as incessant barking and chewing.

To sum up the personalities of Belgian Malinois vs German Shepherd, the latter has a calmer demeanor and can be a good family dog. On the other hand, it requires the knowledge and leadership qualities of a family member for a Belgian Malinois to safely live with the family.

One of the simplest dog breeds to teach is the Belgian Malinois. It’s very smart and always anxious to know. Its curiosity makes it so engrossed in the tasks such as obedience training. However, the owner may find it overwhelming to control as it is loaded with energy. In this situation, it is possible to hire a professional dog trainer to train the dog.

Another thing to point out when training a Belgian Malinois is its tendency to listen and obey one person only in a household and ignore the other family members.

No one can argue that this dog is not one of the intelligent dog breeds, hence it is used to aid military and police personnel in their missions. However, it can be stubborn, thus, it is more of a challenge to train it in comparison to Belgian Malinois. This is the reason why it is highly recommended that training starts at puppy age. For it to be obedient while undergoing training sessions, lots of treats are given to this dog. But overall, the German Shepherd is a fast learner.

You would be amazed if this dog shed very minimally. It doesn’t need a regular brushing routine, in reality, brushing twice a week is enough to keep its coat healthy. It’s enough to bathe it once in four months. To prevent build up, ear cleaning should be performed every week.

It sheds almost all-year-round, so it is highly recommended that you brush its coat every other day. In fact, due to its heavy shedding, some call it ‘German Shedders.’ Grooming kit which contains a de-shedding brush/comb, a slicker brush, de-matting rake, pin and bristle brushes is necessary to prevent the build-up of hair around your house.

Both dogs must be exercised regularly. They are packed with energy, particularly the Belgian Malinois, it can lead to damaging activities to keep them idle and inactive. Both dogs are extremely smart, so their physical and mental health requires regular practice.

A medium-sized dog breed, it requires an average of 2 to 3 cups of good quality dog food. Take note though that the amount of food also depends on the kind of exercise it gets from you.

This is a large dog breed, so it needs more food, which is about 3 to 4 cups of food each day. Dog food high in starch is discouraged because it can result in digestive problems.

The most common health problem of Belgian Malinois is hip dysplasia and elbow dysplasia. In addition, it tends to have progressive retinal atrophy, which can lead to blindness as a loss of photoreceptors.

In contrast, German Shepherd does not suffer from breed-specific eye problem risk, but it is prone to other health factors like exocrine pancreatic insufficiency.

In a nutshell, there are many similarities between these two dog breeds. Both dogs are trained as herd dogs and are subsequently trained as military dogs, guide dogs, and guard dogs due to their inherent intelligence. They are vigorous and energetic, making them excellent outdoor friends and practice.

German Shepherd, however, is the less aggressive between the two, and it is less of a risk involving in a family with kids. But Belgian Malinois can also be a loving family member with early practice and socialization provided there is someone in the family who is skilled in managing high-energy and stubborn dogs.

Regardless of your choice between Belgian Malinois vs German Shepherd, you can rest comfortably in your home since there is a guard dog that will protect you at all cost.