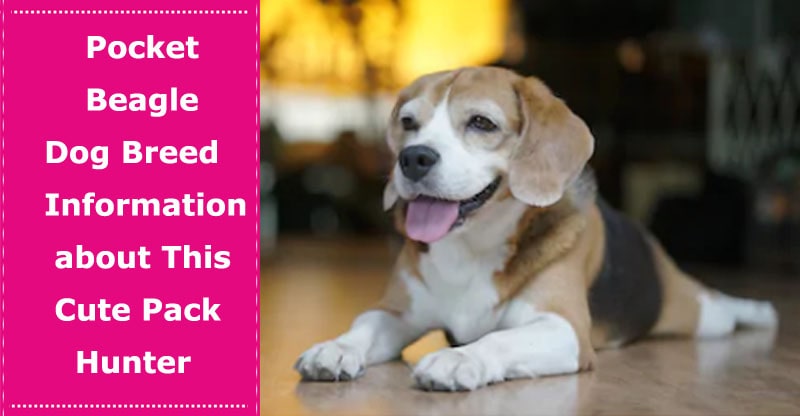 With an adorable face that looks like it cannot harm, it’s no wonder why the Beagle is loved by many. Behind its cuteness, however, the Beagle is a serious pack hunter that is ready to chase anything with its nose!

We may all be familiar with the Beagle dog breed, which is known in two sizes: one that is 13 to 15 inches in the shoulder and one that is less than 13 inches. But did you know that a smaller version of the Beagle actually existed? It’s called the Beagle Pocket, and it’s just 7 to 12 inches tall!

Brief History of the Pocket Beagle

Now, before we all get excited about searching for a Pocket Beagle, sadly, this breed’s true bloodlines had been extinguished more than a century ago. But we’re talking about it now because it seems like this cool pack hunter is making a comeback.

So, Why Were There Tiny Beagles?

In addition, “Beagle” was a term used during the medieval era to refer to any hound dog. Those days small hound dogs were very common and people knew them as “Pocket Beagles.” Their height at the shoulders was only 8 to 9 inches, so they were much smaller than today’s Beagles.

The reason they were called “Pocket Beagles” was because they practically fit into the pockets of the hunters. During the hunt, bigger dogs are asked to find the prey. When they did, the Pocket Beagles were let loose to hunt down the prey as a pack. Their smaller size was useful because the prey normally went to places that could not be hunted by the big dogs.

Queen Elizabeth I and King Henry VII are widely known as this tiny breed’s lovers. Her Pocket Beagles wander around the dining area as dinner was being prepared, to entertain her guests. The guests didn’t seem to mind and even loved their company and their “singing”!

Nevertheless, the real Pocket Beagle hit extinction by the end of the 19th century. Its genetic lines have all been wiped out. So, if you ever see any “Pocket Beagles” today, they’re just Beagles that haven’t met the standard size.

Where is the Pocket Beagle Today?

Beagle fans are now trying to recreate this little scent hound, as the concept of a smaller Beagle is becoming popular again. The modern “Pocket Beagle” as of this time is not a separate size category from the “normal” Beagle. In short, despite what breeders tell you, the “miniature” Beagle version is not official.

How are Breeders Recreating the Pocket Beagle?

The “creation” of a Pocket Beagle is usually done in three ways. These are:

1. Breeding Two Runts of the Litter

Breeding two runts together are the most common way to create Pocket Beagles. In terms of size, it is not uncommon for Beagles to have puppies that fall under the breed standard. Naturally, breeding runts gives a high chance of producing smaller Beagles.

Fortunately, being a runt doesn’t necessarily mean being less healthy than their normal-sized counterparts, but they’re more susceptible to chronic health issues, so it’s something to watch out for.

Dwarfism is also not a rare occurrence in Beagles. Sometimes, breeders may choose to introduce the gene and perform selective breeding so that the dwarfism gene gets passed on.

Dwarfism in dogs is not necessarily a negative thing. Nonetheless, it is a negative thing when it is extreme dwarfism. In such cases, dogs can suffer joint problems, bowed limbs and spinal problems.

Crossbreeding a Beagle with a smaller dog that has similar characteristics is possibly the healthiest way to “create” a Pocket Beagle. This is because the addition of another breed tends to improve the genetic variety. A gene pool with good diversity is needed to reduce the chance of inheriting health problems and undesirable traits.

The problem with crossbreeding is that you can’t tell precisely how the puppies will eventually turn out. Will they look more like a Beagle or like the other dog? Breeding generations of crossbreeds may be required to recreate a Pocket Beagle with its standard.

Can the Pocket Beagle be Registered?

The modern Pocket Beagle can not be certified because the Pocket Beagle is not recognized as a regular or official breed by the AKC or any other kennel club. So, if you’re looking for a small Beagle and a breeder tells you they’re selling a “purebred Pocket Beagle” registered with the AKC, you know they’re just fooling you into a quick sale.

Generally speaking, the muzzle of the Pocket Beagle seems narrower and more pointed than the usual Beagle. Apart from that, it doesn’t really look so different from the Beagle we already know. This means they will have a robust, durable structure, no matter what size they are, that can take on any demanding hunt.

The Pocket Beagle has a dense and slightly rough water-resistant coat. Although the hair may look short, it is actually medium in length. They come in white, red, black, tan, and brown in most cases. Rarer colors include grey, blue, lemon, and liver.

These curious and carefree dogs are willing to follow anything and anyone that smells good — or oddly interesting. When they catch such aromas in the air, they’re likely to leave whatever they’re doing to track it down.

Especially if you let your Pocket Beagles play outside, then, careful monitoring is needed. As a scent hound, their acts are mostly guided by their nose, and when they are eager to follow a scent, there is simply no stopping them!

Although Pocket Beagles are trustworthy, sociable and affectionate, they have their independent streaks as well. And, when you teach them to soothe and amuse themselves while you’re gone, it would be fine to leave them for short periods.

Compatibility with Other Pets

Pocket Beagles are comfortable with others, but since they are hunters, if you don’t socialize them early, they can chase your other pets. Make sure that you introduce them to as many people, pets sights, sounds, and smells during their puppyhood so they will know how to behave properly as an adult dog.

When properly trained, Pocket Beagles are not huge barkers. When they choose to vocalize, however, they usually have three types of barks:

Although they can also be a little mischievous, overall, Pocket Beagles are an excellent pet for any family. They are affectionate playmates to adults, children, and other animals! Their friendly face indeed represents their personalities perfectly.

Pocket Beagles are smart dogs who want to learn new things always. Training should, therefore, be relatively easy if you use a lot of positive reinforcement. It’s recommended to juggle various types of rewards to see which of them appeals to them the most. Stick to that until you find out what they want, so they’ll always look forward to training

Negative reinforcement, as you may already know, should never be used during training. This will only frighten your pet, and to make it worse, it can place an unhealthy strain on your relationship. However, if handled inconsistently, it could become frustrating to dogs. If they do something wrong, you should only reprove them with a stern voice, as this will allow them to associate a non-reward (e.g. your lack of affection) with the wrong action.

It is worth noting that while Pocket Beagles are easily trainable, they can also be stubborn, especially when it comes to housetraining. Of course, with enough patience, they will be able to recognize your house rules eventually. Just don’t give up immediately if they don’t learn it right away. If you want to make the learning process faster, you can seek help from a trusted dog trainer.

Once your dog knows all your house rules, you can level up your training by taking them to events called “Field Trials.” This is a dog sporting event that requires participants to track down a rabbit trail. This helps dogs hone their smelling abilities.

It makes it possible for Pocket Beagles as a smell hound to be in contact with their instincts. Not only will this bring them closer to their roots for a day, but it will also give them the chance to socialize with other dogs and people. Such events usually take a whole day and will be held rain or shine.

Pocket Beagles are pretty low-maintenance once you’ve provided them adequate housetraining and obedience training. Once you get those aspects sorted out, living with a Pocket Beagle can start feeling like fun and games most of the time!

Pocket Beagles will need a reasonable amount of exercise per day due to their hunter instincts. At certain times of the day, you can arrange routine playtimes in the yard and go on regular walks— especially when it’s cool outside. This will give them enough mental stimulation to avoid boredom.

The recommended feeding for Pocket Beagles is 1 to 1.5 cups of great quality kibble daily. Depending on your pooch’s activity levels, you will have to adjust the amount of food that you’re feeding. If your dog is sedentary, stick to the lower end of this range to avoid weight gain.

Pocket Beagles are moderate shedders. In springtime, it gets pretty bad because that’s when they shed their winter coats. Although it’s pretty convenient to maintain their coat you still need to brush it at least once a week to keep their hair clean. The shape of their ears often makes them more susceptible to ear infections, so frequent ear cleaning is required.

Beagles are relatively healthy as a breed. If Pocket Beagles are bred ethically, the chances of inheriting health problems are quite low. However, sometimes, health issues just cannot be predicted from the start. Here’s a list of health conditions that may affect your Pocket Beagle:

Conclusion: Bringing the Pocket Beagle Back to Life

Indeed, the Beagle’s sweet face can be irresistible — and even more so when it’s pocket-sized! While Pocket Beagles are not yet an official Beagle variety, who knows, breeders may be able to recreate them consistently enough to set a new standard for Pocket Beagle.

If you ever decide to get one for yourself, make sure that you only purchase from ethical breeders who genuinely care about the health of their pups.