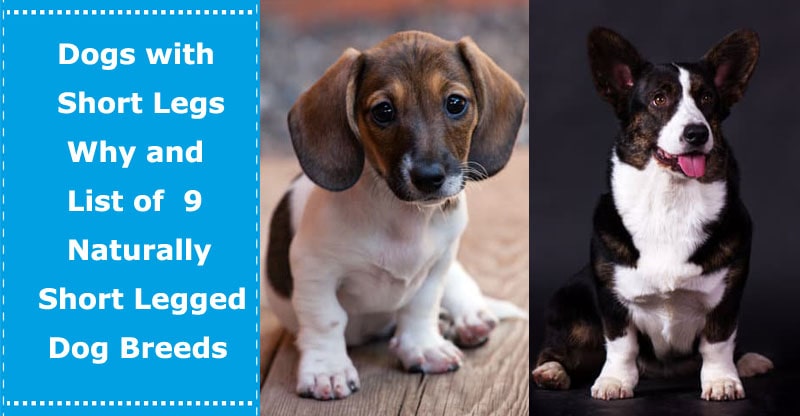 Before you continue reading this article, were you on any of your social media accounts? If so, what did you notice? What did you frequently see?

If you can’t remember, try and go to any of your social media accounts for the moment, scroll down for about 5 to 15 times then come back here.

Notice something? I bet you’ve seen a video or a photo of a cute short-legged dog as adorable as thousands of likes and thousands of views. There’s no doubt that these short-legged animals caught the netizens ‘ heart and stormed the web!

If you look at previous and latest meme culture, you will notice that there has been an exponential increase in the amount of memes about dogs, particularly Corgis. Definitely, everyone wants to know more about these dogs with short legs.

Today, we’ll meet some of the other naturally short-legged dogs and figure out why they are the way they are.

Why are Some Dog Breeds Short?

All dog traits, including the length of their legs, comes down to genetics.

A 2009 scientific research led by the geneticist, Heidi Parker, indicated that because of one specific gene, that is the reason some dogs are short. This additional copy of that specific gene is accountable for the shortness of the legs of all short-legged dogs. Dogs obtained the additional copy through mutation, and this practice can be traced back to 300 years ago when the dog breeding advances were made, giving birth to countless dog breeds that we now love and appreciate.

The gene that the group of Heidi Parker identified causes the dogs to overproduce protein, disrupting their growth during the fatal fetal development stage.

While many of us love our short-legged pets for who they are, their short-leggedness is just part of an evolutionary developmental disorder to researchers like Heidi Parker.

This breed came into existence in Germany, the name “Dachshund” literally translates to “badger dog” in German. They are called badger dog due to what they were intended to do back in the 17th century, which is fighting aggressive badgers in kettles or farms. German people bred dachshunds because their elongated body and short legs create an excellent mix like burrow diggers and badger hunters.

Although their breed compared to most dog breeds is comparatively small, there are still miniature-sized Dachshunds. You’re going to see red, chocolate, tan, or black Dachshund nowadays.

They need very minimal workout and grooming as dogs. They’re relatively hard to train, but if they’re not well trained, but you have to be able to bear with them and go through with it because they can be aggressive to other dogs. Dachshunds are also recognized as noisy barkers, so be ready to discipline yours if you have one. The lifespan of an average Dachshund is 12 to 16 years.

The Cardigan Welsh Corgi is undoubtedly one of the shortest dogs, being just 26 to 32 cm tall. They need only mild exercise and not much grooming. If you’re planning to add a Cardigan Welsh Corgi to your family, you should be ready to train it, fortunately, because they’re dedicated, comprehensive, and smart, they’re really simple to train. I say exercise is a must because if they are not trained, they can be very aggressive to other dogs. A Cardigan Welsh Corgi’s average lifespan is 12 to 15 years, offering you plenty of moment with your dog to generate precious memories.

The Pembroke Welsh Corgi is the Cardigan Welsh Corgi’s cousin. It has a powerful, well-constructed body, but it is shorter than its cousin. Pembroke Welsh Corgis are pleasant household pets, they are extremely intelligent, obedient, and intuitive, which is why they are included in countless dog sports contests such as conformation and herding by many owners. Their lifespan, like their cousins, is also averagely between 12 and 15 years. The Pembroke Welsh Corgi is a very playful, friendly, courageous, and protective dog. They are an excellent option as pets, particularly for those first-time pet owners.

In the Tibetan monasteries back in 1100 BC, Tibetan Spaniels are renowned dogs. Because of their appearance, temperament, and size, their masters would often refer to them as “little lions.” The breed was famous for defending the monastery efficiently, they are very alert, intelligent and active, making it their best job. Tibetan Spaniels are also known as household pets today. They’re still very playful, funny, outgoing, and smart. The Tibetan Spaniel is regarded one of the smallest dog breeds in the globe, being only 25 cm long and having a body that is just about as long as its tail. Despite its size, it can still provide you with great amount of love, affection, and joyful moments.

The English Bulldog is likely the biggest in this short-legged dog list. They still got to the list because, despite their reasonably big body, their legs are abnormally short compared to other standard sized dogs. Don’t let the aggressive looks of the English Bulldog fool you. Yes, they might look aggressive, but they’re very docile, friendly, and willing. Even with children, they’re incredible, which is certainly something to consider if you want to get a dog. English Bulldogs are only 31 to 40 cm tall, have an average lifespan of 8 to 10 years, and are well known for their loud and excessive snoring, grunting, flatulence and drooling even when they are asleep.

The French Bulldog is the British Bulldog’s cousin. The breed came from a mixture of English Bulldogs and French ratters or rat hunting dogs. The French Bulldog also made it to the list because they are also a dwarf breed, just like their friend. Compared with most dogs, they have a smaller muzzle and legs. They have between 10 and 14 years of average lifespan.

They can be simple, affectionate, sociable, and vibrant as pets. They have a medium level of energy, sometimes they are very active, alert, and athletic. But they will be exhausted after you play with them for a couple of minutes and they will rest like their English cousins. French Bulldogs can only to grow up to 30 cm in height, they are excellent dogs particularly if they are trained.

Scottish Terriers, despite having “Scottish” in its name, became very famous in the United States, this is due to the fact that multiple US presidents had a Scottish Terrier as their pet.

The breed, however, was used in farms in Scotland to hunt vermin, foxes, and otters. Scottish Terriers can grow up to 28 cm. They are capable of being feisty, alert and moody. Because they are autonomous, they are often referred to as “big dogs in the body of a little dog.” Scottish terriers are excellent pets, but they aren’t very good with kids. There have been several instances where Scottish terriers have’ snapped’ on little kids, so have that in mind when picking up a pet. If you’re searching for a self-assured, mature, and autonomous dog, you certainly need to consider the Scottish terrier.

The Dandie Dinmont Terrier is a unique breed that has been prominent since the 1700s among Europeans of the middle class and high class. The breed is also renowned for its ability to hunt and catch otters and badgers. This breed is extremely smart, elegant and majestic.

Don’t let the size deceive you, as this breed is very independent. They need to be groomed regularly, however, because of their long and curly hair, especially on their head.

Despite being popular in Europe, the Basset Hound breed actually originated in France, and they were bred for their skills in hunting. Basset hounds are known for their large and heavy body, they have very short legs, long ears, sleepy-looking eyes, and towel-like skin.

Basset hounds still retain their hunting skills nowadays. They’re fantastic to chase and track a scent. They’re fantastic pets as well. They go well with children, they’re not angry easily, they’re smart and understanding. However, they don’t have much energy, so they don’t need to do exercise as much. They just like to sit around and watch most of the time, they can be easily be taught. They’re like a mature dog who’s just looking for peace at everything. However, when there are strangers and other aggressive dogs, they may be aggressive and bark loudly.

Basset hounds don’t grow any taller than 38 cm, and their life expectancy is 10 to 12 years. If you want a pet that would be alright and would even protect your kid, then the Basset hound is definitely a worthy consideration.

Other possible reasons why your dog is short are because of genetically acquired disorders called Osteochondrodysplasia (OCD) and Achondroplasia.

Osteochondrodysplasia or OCD is an abnormality of the cartilage and bone, which leads to numerous possible bone deformities and below-normal bone growth. Breeds who are usually predisposed to this disorder are the following:

On the other hand, Achondroplasia is the dwarfism in dogs, another form of osteochondrodysplasia. There is a great possibility that your dog will have Achondroplasia when your dog does not attain its anticipated height depending on its breed. Achondroplasia dogs generally have short legs. Some breeds are encouraged to have short legs some are bred just like Dachshunds for that very purpose. Other dog breeds typically influenced by this are as follows:

Only by their genetic disposition can our dogs acquire these illnesses. In other words, if their parents or ancestors had Achondroplasia, there is no way to stop our dogs from acquiring these. There are other symptoms other than short limbs that indicate that your dog has Achondroplasia, such as:

If your pet has Achondroplasia or osteochondrodysplasia, allowing your doctor know is the easiest way to explain some of the other cases, your pet may have. It will also assist the veterinarian decide what to do to meet the requirements of your dog.